In Donkey Kong Country, dropping in at Funky's nearest hut, Funky will let the two Kongs ride around the island in his Funky Barrel, free of charge. However, the Jumbo Barrel is unable to travel to any areas that the Kongs haven't yet visited, thus preventing players from skipping levels. Rather, Funky's Flights merely serves as a bridge between the accessed areas of the island.

With one airport in every area on Donkey Kong Island, Funky's Flights is the only way for Donkey and Diddy to travel between areas of the island without beating a boss.

In the Game Boy Advance remake of Donkey Kong Country, Funky also runs a minigame called Funky's Fishing along with helping with flights.

It was renamed and reworked in Donkey Kong Country 2: Diddy's Kong Quest. It was fairly different since the Funky Barrel was noticeably replaced, but functions in a similar way.

Donkey Kong Country 3: Dixie Kong's Double Trouble! was the most drastically changed from Funky's Flights, but still has its heritage.

In DK: Jungle Climber Funky runs his flight service once more. Here, Donkey and Diddy must collect a certain number of Oil Barrels to be able to use the Funky Barrel and fly to another island. Interestingly, the instruction booklet for DK Jungle Climber refers to Funky's Flight service as "Funky Flights", rather than "Funky's Flights". The reasons for this small name change are unknown.

In the Donkey Kong Country animated series, Funky's Flights was located near the beach and docks of Kongo Bongo Island and had a complex system built into that could raise the entire hut into the air and suspend it there. On the show, Funky's Flights, along with offering plane rides to people, it also made deliveries for Bluster's Barrel Works. The inside of Funky's Flights was also shown on occasion on the show and was filled with surfer memorabilia, as one would expect a place owned by Funky Kong to have, along with other objects like a couch, refrigerator and paintings. 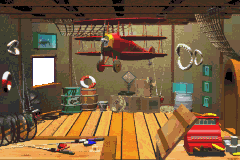 Retrieved from "https://donkeykong.fandom.com/wiki/Funky%27s_Flights?oldid=59163"
Community content is available under CC-BY-SA unless otherwise noted.