Start a Wiki
Fungi Forest is the fifth world in Donkey Kong 64.

Fungi Forest, as the name states, features numerous forests of mushrooms. The stage centers around a giant Cuckoo Clock, which has the ability to change day into night and vice-versa. Most of the areas of this world are only accessible during certain times of the day, and enemies are also affected by time as well, often becoming more hostile when day becomes night.

Dogadon is fought in a rematch by Chunky Kong here. He is stronger than in his first fight.

This world introduces blue Kong Switches; these can only be activated once the Kongs get the Super Simian Slam potion from Cranky Kong.

The exterior of the water mill.

Inside one of the water mill's rooms.

Inside another of the water mill's rooms.

The giant spider's lair inside the water mill.

An area of Fungi Forest, featuring a garden.

The interior of the giant mushroom.

Inside a room of the giant mushroom.

The tree where Diddy Kong can talk to and race the owl character.

The interior of the tree stump. 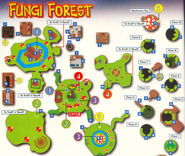 Map of Fungi Forest
Add a photo to this gallery

Retrieved from "https://donkeykong.fandom.com/wiki/Fungi_Forest?oldid=59401"
Community content is available under CC-BY-SA unless otherwise noted.