Frosty Fruits is the sixth stage in Juicy Jungle from Donkey Kong Country: Tropical Freeze. It is preceded by Jelly Jamboree.

This is the first level in the game that has an arctic-esque atmosphere. Most of the level also takes place inside a lofty timbered factory where huge popsicles are being produced. Said popsicles act as platforms. Dangerous rotating drills that come out from and retract inside solid ice blocks make up for the dedicated obstacles here, but Snowmad soldiers also try to hinder the Kongs.

The characters commence in a brick-constructed area guarded by bamboo lanterns and big ice blocks. The area lengthens further into the level with a frozen solid bridge, on which a Boom Bird strolls in front of several popsicle blocks whereon a Waldough steps. At the right, after a tiny slope, there is a fortified plastered wall which features a path underneath, hosted by three drills, harmful for the Kongs. Another area opens up, containing a platform with a Buddy Barrel and a vegetable spring platform guarded by a Hootz and found under a vertical trail of bananas. Higher up is the continuation of the level, first marked by a sloping area and two other solid walls each hosting a pair of drills. Between these and a ledge stand Painguin Tuck and a Plump Fruit, the latter whose terrain can be ground pounded on so that the fruit spews a Banana Coin. In the background, above the pit that gapes in the Kongs' way, some wooden machinery conveys solid popsicle blocks into the pit, one at the time. As one falls and lingers in the pit at the bottom of the screen, another one plummets from above and puts all of its weight onto the current block, forcing it to dive lower and therefore taking its place. (This gameplay mechanic repeats more times in the level and will be referred to as "popsicle stack machine" in this article.)

Moving on, there are two brick platforms at the bottom of the screen. They are covered with snow, and the pit in-between them is hatched with destructible ice blocks. Another abyss opens up, this time rooming a fruit spring platform with a Hootz above it. Afterwards, a frozen bricked bridge that starts with an Item Handle (covering a banana bunch) continues with a long slope trailed by bananas; above its base, a conveyor rope powered by two woody pulleys lead a hanging ice block, topped with a wooden platform and hosting two drills. An abyss with two fruit spring platforms, a popsicle stack machine and a frozen ground patch (obfuscated by another conveyor rope with a drill-containing ice block, as well as an Archy and a chilled fruit spring platform), stands before a very solid wall of brick. Over this wall, right after its ledge, are two feeble ice blocks that cover a tunnel, into which the Kongs can fall to get impelled by a vertical fruit spring platform. The tunnel is guarded by a large group of consequent drills arranged in the ceiling, as well as a trail of bananas. The tunnel's way out has a Painguin Tuck sentry; after this, a territory ledged by two decorative bamboo lanterns contains the first checkpoint of the level, as well as an ice block containing an Item Handle, which, upon being pulled out, frees a Winged Banana and its "school" of bananas. The territory ends with an impassable chasm; however, there is a Barrel Cannon that launches anyone who gets inside towards the background of the level, on a huge, upside-down popsicle hanging by a wooden mechanincal arm. Upon landing on its surface, it starts sliding down its stick, but a row of other huge popsicles, arranged the same way, hazardously avail at that moment. These lead to an enormous and continuous icy bridge, overshadowed by two walls with drills underneath. In the area divided by the two, there is a circular array of reeling bananas and a Papa Painguin (the bananas can be collected to receive a Banana Coin). The bridge ends with a pit, from which a fruit spring platform had grown. Atop this platform is a vine switch which activates a mechanical arm holding a huge popsicle of the same kind as before - the player can choose to either follow the next platform and dodge some spiky drills from above, or use the popsicle to slide down along with it and access a secret area under the aforementioned platform. Both ways lead to an area with huge popsicles getting carried along conveyor belts and two Hot Hootz guarding the place. Furthermore, there is a pair of Barrel Cannons that lead the characters to the frontground of the level; specifically, where a checkpoint prevails.

Beyond the checkpoint, the heroes venture more inside the factory. A popsicle stacking machine and a Puffton help the characters reach a Barrel Cannon. It launches them over a spike basin and onto a series of horizontal fruit springs that bounce the heroes off. In between the two areas with springs (quite designed to be symmetrical), there is a tunnel of drill ceiling and slippery floor. After this army of obstacles, a slippery, curved girder leads towards a series of popsicle stacking machines that form ground for the characters in order to advance further. (On a side note, the player can see ice blocks getting carried by wooden slides in the background, all arranged in a convoluted labyrinth throughout the icy factory.) Beyond the machines is a patch of ground that starts with an Item Handle and continues with a slippery tunnel of huge drills. In the front of its exit is a high, arched bridge which can be accessed with spring platforms. A group of Tucks led by a Pointy Tuck walk on the bridge; behind them, the bridge abruptly ceases into a group of uniformly-placed spring platforms. At the right is a rather solid and enormous frozen and meandering plant stem, which marks the Kongs' exit from the factory's plant and re-enter in the jungle. The stem acts just like actual ground. On the stem, there is a Plump Fruit (hiding a banana bunch) and a Papa Painguin. Down the descending stem, there is yet another slippery tunnel with drills tucked in the ceiling. A large chasm opens up afterwards, but a Barrel Cannon helps the Kongs overcome it and reach a large patch of ground, whereon a Walbrick marches. Before the Walbrick, encrusted in the ground, is an ice block covering a spring platform, above which is a set of reeling bananas. Right after this area, the very last group of popsicle stacking machines hide in the jungle's canopy. The popsicle blocks they drop form a stairway to the level's Slot Machine Barrel. 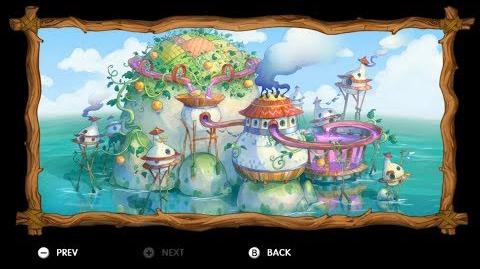