Frogoons are regular enemies found inside levels of the Jungle and Forest worlds of the Donkey Kong Island in both games. They will usually stay at the same place, jumping upwards at regular intervals and inflating themselves, while trying to eat a fly around them. Frogoons can be easily defeated by the Kongs using jump or roll attacks at them. Even projectiles shot by Diddy Kong's Peanut Popguns can defeat them. The only tricky part on attack them is that the player must be sure not to miss them, due to the fact that they suddenly jump. Another variant of the Frogoons can be found floating above ground or gaps, rising and descending constantly. That allows the primates to use the enemies as a bouncing platforms to collect floating items or traverse pits. When defeated, Frogoons go flying off into the breeze in a fashion that is similar to a punctured balloon. Frogoons will often appear in a group of three or four, which allows the player to get Banana Coins by three or more consecutive jumps on them.

In both games, there are also yellow variants of Frogoons, called Hopgoons. These enemy variants do not inflate themselves, and they just jump forward at regular intervals. 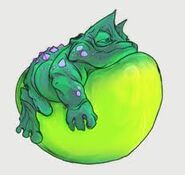 Inflated Frogoon as seen in the game Donkey Kong Country Returns for Wii. 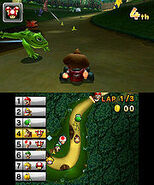 Frogoon as seen in the DK Jungle course of the game Mario Kart 7 for 3DS.
Deutsch Español
Community content is available under CC-BY-SA unless otherwise noted.
Advertisement