Flitters are somewhat common enemies in Donkey Kong Country 2: Diddy's Kong Quest and Donkey Kong Land 2, usually found in the swamps of Krem Quay (Krem Cauldron in Donkey Kong Land 2). They are obviously modeled after real-life dragonflies, though they do not possess any kind of special attack besides flying in a set path.

Flitters usually just fly dormant where they are. They do not seek out the Kongs or appear to even notice them, so they're likely minor air grunts. This makes sense due to the definition of Flitter; to move quickly in a random or purposeless matter. Flitters, because of this, are considered one of the weakest enemies in the game, usually used for a platform for the Kongs to jump off of. They first appear in Donkey Kong Country 2 and reappear in Donkey Kong Land 2. 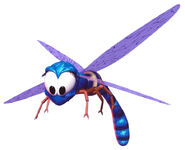