Fish Poker Pops is a varient of Waldough appearing in the game Donkey Kong Country: Tropical Freeze. Fish Poker Popses are members of the Snowmads.

Fish Poker Pops appears as a large greyish-brown male bipedal walrus with a large blonde mustache. They wear viking helmets and overalls made of wool with a Snowmad insignia. They also have blue paint all over their wrists. They are seen carrying a stick with blowfish biting on each end of the pole, and using it as a weapon. They have angry expressions on their face, as well as small eyes and noses. Their helmets have four nails in them, assuming to keep it from falling apart. Their horns have two rings keeping them in place. They also have 2 teeth at the end of their “beard”. Their beard is a beige-blond color. Their overalls have multiple straps all over, with an unknown purpose. Near their lower body is a “skirt” made of their own fur, assumably. They also have 3 toes on their feet.

In the game, Fish Poker Pops infiltrates arenas of stages. They will pursue the Kongs with their stick when. They also sense when a Kong appears without looking and turn around, due to their coding in game. Fish Poker Popses will try to hit the following Kong with their sticks by raising it up, and swinging it down hard. The Fish Poker Pops appears to be the toughest Waldough since they wear a helmet on their heads, preventing jump attacks. They hold the stick with blowfishes in front and back of their bodies, preventing roll attacks. They are large enough to block the Kongs from jumping over their heads. To defeat Pops, a Kong should roll attack them thrice in the front when they raise their spears before they slam it down, or when they are stunned by a ground pound. They can easily be defeated by throwing a barrel or an enemy such as Tuff Tuck, or Tuff Fluff at them. 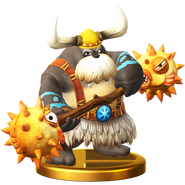