Firehead Neds are found mostly in the Cliff world of the Donkey Kong Island. They first appear in the level Sticky Situation, and then later in Boulder Roller. They also appear in the Cloud level Tar Ball Fall of the Nintendo 3DS game version. They move on carts in similar way to Bonehead Jeds, enemy variants from the same games, but they have red eyes and the tar in their carts is on fire. Also opposed to Bonehead Jeds, Firehead Neds will extend their spines and lower them soon afterwards at regular intervals, independent from the player's inputs for jumping. It requires good timing by player in order to move past these enemies when their spines are down. Firehead Neds are also more dangerous because they will constantly spit fireballs horizontally and forward. These fireballs can be shoot when their spines are up or down, changing the height of the attack. The ground-pound move will not affect Firehead Neds, but a jump attack on their heads will stun them for a few seconds. Before they recover, the Kongs must quick roll or jump on the enemies again to defeat them for good. If the Firehead Neds resume their patrol after being stunned, they will always require two consecutive physical attacks to be defeated. Firehead Neds can also be defeated once by the primates throwing single barrels at them. After they are defeated, it is possible to see some embers flying around. 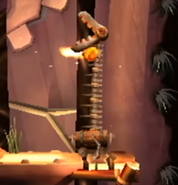 Firehead Ned extending its spines and spitting a fireball, as seen in the game Donkey Kong Country Returns for Wii.