Extra Life Balloons are collectable items related to extra life counters of the player in the Donkey Kong series. They first appeared in the game Donkey Kong Country.

In the games, the player starts a new game file with a limited number of extra lives. After both playable Kongs are harmed by enemies and hazards or fall into pits, the player will spend an extra life to continue playing from the beginning of the level or latest active checkpoint, and is able to try traverse the previous obstacles again. If all extra lives are lost, the player will be sent to the Game Over screen, and they will have the option of continuing the game from their current save file, if there is one. In the Donkey Kong games, extra lives are usually associated with Extra Life Balloons. When the player collects an Extra Life Balloon, they earn certain number of extra lives. In some games, this number depends on the color of the collected balloon, being from most to least common: each Red Balloon is worth one extra life, each Green Balloon is worth two extra lives, and each Blue Balloon is worth three extra lives. Extra Life Balloons can be found in secret places inside levels, sometimes, as invisible collectables or rewards for clearing certain Bonus Rooms successfully. Most of the Extra Life Balloons will also disappear at the top of the screen by floating away if the player takes too long to collect them. And new extra lives can be received by collecting one hundred of bananas.

In the game Donkey Kong Country, by the player collecting three Animal Tokens of the same kind in any stage, they will be sent to a special Bonus Room instantly. There, the player will take control of the same Animal Buddy of the collected tokens, and they must traverse the area and collect small versions of the same token within a time limit. After the time is up, for each one hundred of collected tokens, the player will earn one extra life. Inside each special Bonus Room, there is also a large Animal Token hidden somewhere, and if the player collects it, their current number of small tokens collected will double up. After leaving the special Bonus Room, the Kongs will be sent back to the beginning of the previous stage or active Star Barrel inside it.

If the player is able to make the primates to bounce on enemies at least eight times consecutively, they will earn an extra life in the Super Nintendo Entertainment System version of the same game. If the attacks are keep going after the eighth one, each additional bounces will generate single extra lives. This exploit is no longer present in the Game Boy Color version of the game, and, in the Game Boy Advance version, single extra lives are earned for each series of seven consecutive bounce attacks on enemies, and additional bounces are not rewarded. By visiting the Monkey Mines stage Millstone Mayhem in the SNES version, and leading a regular Krusha towards the entrance of the location, the player can make Diddy Kong to slide on the structure above the entrance at the right time, landing and bouncing on the enemy. By the player also holding the "Left" directional button during the process, Diddy will be able to bounce on Krusha multiple times and earn many extra lives after a few seconds. In order to stop the exploit, the player must release the "Left" button, resulting in harm to the small Kong. The same exploit at the same location is no longer possible in the GBC and GBA versions of the game.

In the GBA version of the game, if the player visits the Funky's Fishing, located in every world of the game, they can earn single red Extra Life Balloons by fishing certain numbers of fishes or items during the minigame. Also in the same game version, by the player entering any of the Candy Kong's Dance Studios and playing well the rhythm minigame[1], they can receive single blue Extra Life Balloons.

Inside regular stages of the game Donkey Kong Land, the player can find Kong Tokens, regular coins depicting the faces of Donkey and Diddy Kong on each side, respectively. At some points, they will come across Bonus Rooms containing a Button Barrel, consisting of a small room with a Barrel Cannon rotating at 180 degrees and moving back and forward at the top of the screen constantly. There is also a button on the ground, which the player can make the heroes to jump on it in order to trigger the barrel to shoot collected Kong Tokens. By using good timing and being agile enough, the player will earn single extra lives for each coin recollected. Any missing Kong Tokens will be lost for good, and after expending all current coins owned by the player, the Kongs will be sent out of the Bonus Room. It is also possible to leave the room earlier by using the exit at the right side of it. The game files do not keep track of the current number of Kong Tokens in the player's possession, with the number always returning to zero after reloading files.

In the game Donkey Kong Country 2, red, green and blue Extra Life Balloons can be earned by expending Banana Coins and answering series of quiz questions correctly in the Swanky Kong's Bonus Bonanza, located in most of the world maps. These quiz minigames can only be cleared once in a new game file.

In the GBA version of Donkey Kong Country 2, blue Extra Life Balloons can be received by paying Banana Coins and beating a current time record when revisiting boss stages. Also in the same game version, Extra Life Balloons of multiple colors are some of the rewards of the minigame Bag a Bug, available in any locations of the Klubba's Kiosk by using Banana Coins to play it.

In the GBA version of the game Donkey Kong Country 3, by the player entering the Funky's Rentals, they can play any of the four challenges after they are unlocked. If the player is able to clear any of the challenges envolving aquatic vehicles successfully, they can earn some rewards, including single red Extra Life Balloons.

Also in the GBA version of the same game, if the player enters any locations of the Cranky's Dojo, they can spend some Bear Coins and take control of Cranky Kong during a minigame. In the minigame, Cranky must deflect thirty small Bristles coming from both sides of the screen at different heights by using a shield. The rewards for this minigame include red Extra Life Balloons.

In similar way, if the player visits any of the virtual reality[2] domes, located in most of the world maps of the same game version, and pays Bear Coins to Swanky Kong, they can take control of Dixie Kong during the minigame Swanky's Dash. In this auto-runner minigame, the player must collect one hundred or more golden stars within a time limit, while avoiding obstacles and moving Dixie around the interior of a large pipe. The prizes of the minigame also include single red Extra Life Balloons.

In the games Donkey Kong Country Returns, Donkey Kong Country Returns 3D and Donkey Kong Country: Tropical Freeze, only red balloons are related to earning extra lives for the player. These red balloons are generic looking, and do not depict main characters' faces like in the previous games. When the player loses an extra life inside a level in single player mode, Donkey Kong is sent back to the beginning of the level or latest active checkpoint, floating down from the top of the screen by holding a red balloon. The player can also press the "Jump" button to pop the balloon and drop on the ground faster. In multiplayer mode, two Extra Life Balloons are spent for each time as both players' Kongs are defeated. The player with a defeated Kong can also summon a dropping DK Barrel, being hold by a red balloon and containing their character, by spending a single extra life at any moment. But the present player's Kong must touch the barrel before it floats down and disappears below the screen, wasting an extra life for nothing. In the world maps of Donkey Kong Country Returns and Donkey Kong Country: Tropical Freeze, it is also possible to spend one extra life to summon a player's defeated Kong during the multiplayer mode. At the same way, when adding a second player in the world maps, if two Kongs are already present, no extra life will be spent to assign the assist character for this player. 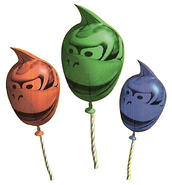 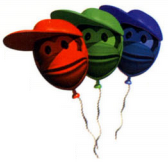 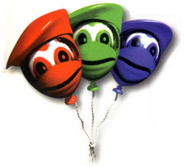