"He can't really fly, but Expresso the ostrich can flutter about."
—Cranky Kong

Expresso appears as an Animal Buddy in a few levels. Expresso cannot attack the foe, nor can the Kongs when riding Expresso, but Expresso is still useful. He can fly to a small extent, allowing him to reach very secretive areas not even see able by Kongs. Expresso is also quite tall, allowing him to walk over smaller foes, such as Klaptraps. Lastly, Expresso can run faster and fly overhead overall faster than the Kongs and other Animal Buddies.

Expresso returns in Donkey Kong Land alongside Rambi as the two Animal Buddies of the game. Expresso is mainly found in bonus games in this game. Expresso also has been majorly upgraded to not only deal with regular enemies, but even handle Zingers.

He is mentioned in the game's manual. Cranky (from whose point of view the manual is written) expresses hope that Expresso, along with Winky, will appear in the game as opposed to Rambi. Contrary to this, Rambi appears in the game while Expresso does not.

Expresso appeared in one of the trailers for the canceled racing game Donkey Kong Racing. It is unconfirmed if he was actually rideable.

In the Club Nintendo comic "Donkey Kong in: Banana Day 24", Expresso is ridden by Diddy and Dixie to an airport.

Expresso makes a cameo as a collectible trophy in the game Super Smash Bros. Brawl, and this has been his latest appearance.

An ostrich friend with sneakers on both feet. Riding Expresso allows for high-speed dashing. As an ostrich, Expresso can't fly, but rapid button pressing can put extra distance on his jumps. This can be used to help Donkey Kong reach distant places. 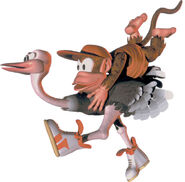 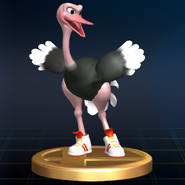 Expresso's large Animal Token from the Expresso Bonus! from Donkey Kong Country.
Add a photo to this gallery
Retrieved from "https://donkeykong.fandom.com/wiki/Expresso_the_Ostrich?oldid=57764"
Community content is available under CC-BY-SA unless otherwise noted.