"Enguarde the swordfish will help you get straight to the point! "
—Cranky Kong

Enguarde the Swordfish is a long-time recurring Animal Buddy that has aided the Kongs in almost all their underwater adventures. Enguarde has been around since the original Donkey Kong Country and has returned in the rest of the trilogy, as well as in many games after it.

Enguarde possesses the ability to stab an underwater foe, which greatly aids exploration of underwater areas, as Kongs cannot hurt underwater foes regularly. In Donkey Kong Country 2: Diddy's Kong Quest, and it's successor Donkey Kong Country 3: Dixie Kong's Double Trouble!, Enguarde can charge up it's stab and release to open Bonus Stages or just to travel a great distance, defeating enemies directly in front of it. Enguarde can also swim more precise than the Kongs.

Enguarde debuted in the first water stage of Donkey Kong Country, Coral Capers, and most of the water stages after. Enguarde is the Kong's only means of attacking underwater enemies, by thrusting his very reliable bill (though note some enemies such as Clambo are immune to his attacks, but only if it is closed), otherwise they will have to riskily swim and avoid enemies. Enguarde swims with ease, being a fish, and faster than the Kongs. Because of this, Enguarde is considered a very useful asset to the team. Enguarde can charge himself forward to hurt any foes. He can also take a hit for the Kongs like the other Buddies, but note he'll try to run away, in most cases out of reach unless he hits a wall and turns around. He can also simply continuously charge to swim faster than a normal Kong.

Enguarde's role remains unchanged from the previous game in Donkey Kong Country 2: Diddy's Kong Quest and Donkey Kong Land 2, except he now can charge his attack, allowing him to charge suddenly forward, defeating underwater enemies in his path, or simply getting through a straight area quicker. This charge ability can also be used to get secret underwater bonus areas, the said areas usually indicated by bananas leading into them. Also, he is not seen in as many underwater stages compared to his Donkey Kong Country appearance due to the introducing of other aquatic Buddies, Clapper and Glimmer. In this game the Kongs can transform into Enguarde via Animal Barrel. Lastly, there is an Enguarde segment in the stage Animal Antics of Lost World.

Enguarde returns in Donkey Kong Country 3: Dixie Kong's Double Trouble! as one of the Animal Buddies appearing in the game. His powers and purpose are exactly the same of what they were in Donkey Kong Country 2: Diddy's Kong Quest. He also is featured in the boss stage against Barbos, where he must charge into the boss's weak spot after exposing it.

Enguarde reappears in Donkey Kong Land III. He acts the same, but unlike the three previous games, Enguarde has lost his Supercharge ability.

Enguarde is found in the Gloomy Galleon, marking his only appearance, and only Lanky can use him. He is used to break treasure chests  and to unlock an area for Tiny to get the mermaid's pearls back.

In Donkey Kong Racing, Enguarde along with a pink-colored version appeared in a trailer for the now canceled game. His skin has gained a few more colors. Tiny is seen riding him, in of course an underwater course, and Diddy can be seen on a pink colored one. Whether the pink version is a female version or an entirely new character is unconfirmed

His latest appearance was Donkey Kong Barrel Blast, being a rideable Animal Buddy. He is only rideable in underwater stages after being freed from the Animal Crate. It is speculated that his role would be similar in Donkey Kong Racing.

Enguarde appeared as Donkey and Diddy's Animal Buddy in the third part of Club Nintendo's comic "Donkey Kong Country". Diddy and Donkey Kong ride him through water and get attacked by several underwater enemies. An exploding TNT Barrel pushes them out of the water and onto King K. Rool's ship Gangplank Galleon, marking his last appearance in the comic.

Enguarde cameos as both a collectible trophy and sticker in Super Smash Bros. Brawl.

A swordfish animal buddy. Enguarde always appears on water stages where he can loyally help Donkey Kong around. Much appreciated, right, DK? Complementing his cute, round eyes, Enguarde's pointed bill proves to be a powerful weapon. One thrust from it will easily down most underwater opponents. 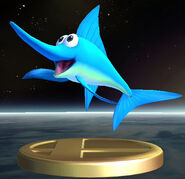