Electrasquids are enemies from Donkey Kong Country Returns and Donkey Kong Country Returns 3D. They are electrified, squid-like enemies who are shot out of turrets. Most of the time, the turrets will shoot out a Squidly. Unlike Squidlies, Electrasquids cannot be jumped on, since they are encased in electricity. They first appear in the Beach levels Sloppy Sands and Blowhole Bound and appear lastly in the Cliff level Tippy Shippy.

The Electrasquid has a red body, along with a blue shell, since they are a mollusk. Their shell, unlike Squidlies, has a rather sharp looking texture, making them look rather dangerous, which they are in fact, since they cannot be defeated by any means, except for throwing a barrel. 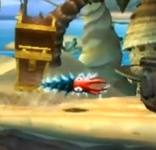 Electrasquid near a popping treasure chest.

Electrasquids and Squidlies in the Beach level Blowhole Bound.
Deutsch
Community content is available under CC-BY-SA unless otherwise noted.
Advertisement