Start a Wiki
Dumb Drum is the fifth boss of Donkey Kong Country, in the world Kremkroc Industries, Inc., and in the stage "Boss Dumb Drum". He is heavily based off oil drums, drums that appear most notably in Oil Drum Alley.

When the battle starts, Dumb Drum will drop down from the ceiling, and must be avoided. This battle is unique from other battles in that it actually contains regular enemies. In fact, Dumb Drum's attack pattern is to drop down very fast, spawn 2 of an enemy (see below) and repeat, with tougher enemies and more dropping down after each "round".

After it disposes the last of the minions, Dumb Drum will be defeated and will explode. This makes this boss somewhat odd in that you never have to directly attack it, though in the Game Boy Advance version, TNT Barrels must be thrown at Dumb Drum to defeat it. 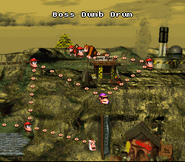 Boss Dumb Drum in the overworld. 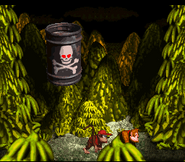 Dumb Drum about to crash on the ground. 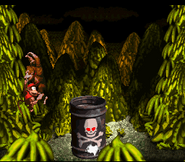 Dumb Drum crashing on the ground. 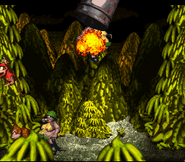 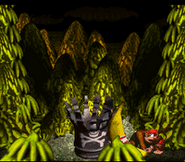 Dumb Drum defeated.
Add a photo to this gallery

Boss Dumb Drum in the overworld.

Dumb Drum crashing on the ground.

Dumb Drum defeated.
Add a photo to this gallery

Retrieved from "https://donkeykong.fandom.com/wiki/Dumb_Drum?oldid=59298"
Community content is available under CC-BY-SA unless otherwise noted.