"Go and look in your hoard, I think you'll be in for a surprise!"
—Cranky Kong

K. Rool stole the Bananas to starve the Kongs to death in Donkey Kong Country. Donkey and Diddy Kong battled through all of the bosses and Kremlings that raided Donkey Kong Island in order to retrieve their precious hoard. They appear to win a giant Banana for every boss they defeat, and the boss arenas themselves appear to be comprised of of DK and Diddy's stolen Bananas (as if K. Rool ordered all of the bosses to steal DK and Diddy's Bananas with him), though the game will not show the hoard gaining any size at all until K. Rool is taken down.

The Banana Hoard does not make a physical re-appearance in the handheld sequel to Donkey Kong Country, though it was stolen again by K. Rool after DK and Cranky made a bet before the events of the game, where DK and Diddy reclaim them on an 8-bit system.

The Banana Hoard does not make a visual re-appearance in the sequel to Donkey Kong Country, though it does have an importance in the story.

In this game, K. Rool kidnaps DK and demands the hoard as ransom. Diddy refuses, explaining how hard he and DK worked to recover it in the last two games and how crazy DK would be if he lost his hoard again. Diddy and Dixie set out on a quest to rescue DK in order to protect their Bananas.

The Golden Bananas make up the Banana Hoard. There were 200 Golden Bananas stored in the Banana Hoard and K. Rool stole them at the beginning of the game along with Diddy, Lanky, Tiny and Chunky. There are twenty-five in each level, but the player will only get five per Kong. The credits show how much Bananas DK, Diddy, Lanky, Tiny, and Chunky collected.

The Banana Hoard once again appears in Super Smash Bros. Brawl story mode, the Subspace Emissary. Bowser sent out a Hammer Bro. and a Goomba to steal DK and Diddy's Bananas. Donkey Kong started to chase them, though when he jumped out of the jungle, he still couldn't catch them as they drove too fast and was too far from him. The Goomba jumped to two Bill Blasters which fired three Bullet Bills toward DK. Diddy Kong then emerged from the jungle and used his Peanut Popguns to destroy and stop them, after which the Kongs chased after the thieves. While they are successful in retrieving their Hoard, Bowser appears and turns Donkey Kong into a trophy as he punches Diddy Kong away to save him. The Banana Hoard does not appear for the rest of the story; it is possible Bowser simply left the bananas where they were since he only needed them as bait for the Kongs and thus had no further use for them.

At Volcano boss, Donkey Kong and Diddy find their hoard in the tikis' tower after waking from their Rocket Barrel crash. The nine tiki lieutenants emerge from behind the banana pile and introduce their leader, Tiki Tong. They load the banana into Tiki Tong, who, after spinning rapidly around, then vomits the banana juice over them. Completely covered, the operatives merge to form a pair of hands for Tiki Tong. During the battle, when the Kongs damage a hand two times, it explodes into a mass of bananas. After the defeat of the Tiki Tak Tribe, Donkey Kong and Diddy Kong presumably replenish their hoard with the bananas expelled from the volcano.

In sequel Donkey Kong Country: Tropical Freeze, the Banana Hoard makes a possible appearance in the beginning of Homecoming Hijinxs, the first level of the frozen Donkey Kong Island; a Big Sphen and Fish Poker Tucks are seen with a crate of bananas, possibly pilfered from the nearby hoard. 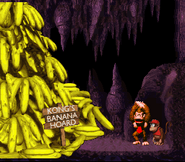 The Banana Hoard being stolen in Brawl.