Not to be confused with the game it's based off, Donkey Kong Country 3.

Like the other games in the Donkey Kong Land series, Donkey Kong Land III was packaged with a yellow cartridge and was compatible with the Super Game Boy for SNES. The game was not released in Japan until 2000, where it was released as a Game Boy Color game, and was called Donkey Kong GB: Dinky Kong & Dixie Kong.

Shortly after the events of Donkey Kong Country 3, Dixie and Kiddy Kong are informed of a contest taking place in the Northern Kremisphere to find The Lost World. Donkey and Diddy Kong set out to find it and, Dixie not to be upstaged, sets out too with Kiddy Kong. Their adventure would take them in new parts of the Northern Kremisphere, however with familiar enemies and bosses.

The gameplay in this game is heavily based off Donkey Kong Country 3 where the player controls either Dixie or Kiddy Kong at a time and must get to the end of a stage successfully and pull down the Stage Flag. Dixie retains her Helicopter Spin ability from Donkey Kong Land 2 and Kiddy can use some of his special abilities from DKC3, mainly being able to jump on enemies. Although the stage outlines are different, many enemies from DKC3 return unchanged, and are defeated in similar ways.

Most items are carried over from Donkey Kong Country 3, and function similarly.

All of the animal buddies return from Donkey Kong Country 3, except for Parry the Parallel Bird and Quawks the Parrot.

Dixie and Kiddy Kong return as the main protagonists, but there are notably less allies than before. Only Wrinkly Kong and a lone Brothers Bear literally named Bear made it into the game.

The enemy cast is carried over from Donkey Kong Country 3, meaning there is a large enemy roster. Only ones that did not return are Gleamin' Bream, Koindozer, Krosshair, Kuff 'n' Klout, Nibbla and Swoopy.

Only five of the bosses return from Donkey Kong Country 3, the two that did not are Belcha and Squirt.

When this game was ported to Game Boy Color, there were some changes made to the game, most of which are graphical changes. Unlike many other ports, such as the Game Boy Advance ports of the Donkey Kong Country games, there are few changes made.

All of these following cheats are done in both versions of Donkey Kong Land III, except for the dying part in the Jetty Jitters demo which is exclusive to the Game Boy Color version. 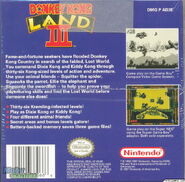 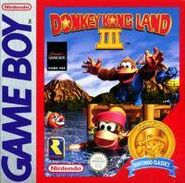 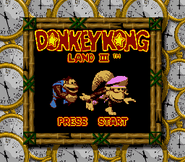 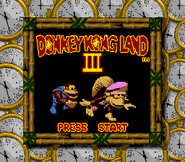