Not to be confused with the game it was based off, Donkey Kong Country 2.

The game is a pseudo-sequel to Donkey Kong Country 2 and takes place before Donkey Kong Country 3. This game is often mistaken as a handheld port of Donkey Kong Country 2 - this is not true. Although the two games run on the same engine and have the same named areas, the layouts on the majority of the stages are new, and the storyline is slightly different. Another difference is that two worlds, Krem Quay and Crocodile Cauldron, are merged into one world: Krem Cauldron. Kleaver is the boss of this area, while Kudgel does not appear at all in the game.

After Diddy and Dixie Kong rescue Donkey Kong from Kaptain K. Rool, Donkey is lured into a trap by the Kaptain on the newly revived Crocodile Isle. Donkey is kidnapped again so the Kongs: Diddy and Dixie must rescue him... again.

The last stage (Krocodile Kore) with the final boss battle with K. Rool in the Game Boy title, takes place in a new place, that being a volcano crater surrounded with lava, rather than the decorative temple from the previous SNES game. Also, on the map screen, the energy remains extinguished.

After K. Rool is defeated, he only passes out and his escape is never shown, giving the Kongs the assumption that he presumably perishes during the explosion after the island's destruction is triggered.

Donkey Kong Land 2 can only be played in single player. The gameplay is based on Donkey Kong Country 2, but the game is restricted by hardware limitations of the Game Boy, similar to Donkey Kong Land, like only one Kong on the screen per time. Homever, the game does not differ from its SNES counterpart as much as Donkey Kong Land does.

There are seven worlds in Donkey Kong Land 2, with Krem Quay and Crocodile Cauldron worlds from Donkey Kong Country 2 merged into Krem Cauldron. The stages Haunted Hall and Castle Crush are replaced by Krazy Koaster and Dungeon Danger, respectively. By using normal means, the Lost World only can be accessed after the player has collected all forty-seven Kremkoins to pay Klubba at his kiosk next to Gloomy Gulch in the overworld map.

Apparently, Donkey Kong Land 2's manual contained a lot of errors and appeared to be entirely copied from the instruction booklet for Donkey Kong Country 2[3]. The errors are as listed: 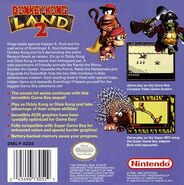 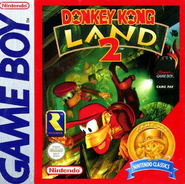 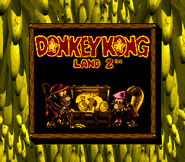 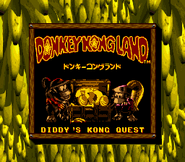 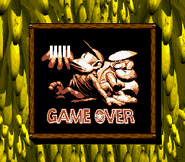 Game Over screen on the Super Game Boy for SNES. 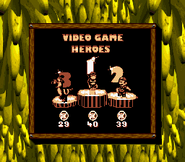