Not to be confused with the game it was based off, Donkey Kong Country.

The game is often mistaken as a Game Boy port of Donkey Kong Country. Although both games use the same engine and share some resources, Donkey Kong Land possesses its own storyline, different levels and worlds, some new enemies and bosses.

The game is set as a pseudo-sequel to Donkey Kong Country. Donkey and Diddy Kong tell Cranky Kong all about their recent Donkey Kong Country adventure. Cranky admits that he underestimated the success of it, but blamed it on the "fancy graphics", "modern music" and the fact that "kids'll buy anything nowadays". Cranky Kong proceeds to ramble about his older games but Donkey and Diddy ignore him, telling him that the gameplay was also a factor.

Despite agreeing with it, Cranky asks if both heroes believe that the game would still be a success even on a 8-bit system, such as the Game Boy. Donkey and Diddy answer they will even let the Kremlings to steal the banana hoard again and get it back on the Game Boy. After tricking both Kongs in accepting the bet, Cranky then declares that he will call for King K. Rool to steal his grandson's bananas, hide them in new places around the Donkey Kong Island, and use new tricks and enemies in order to make a harder adventure and stop the heroes. Feeling angry for falling for Cranky's plan and preferring to lie down resting, Donkey Kong agrees with the bet and decides to go to his treehouse to get some sleep before the adventure.[3]

Gameplay was based on the original Donkey Kong Country. The game is a sidescrolling adventure game starring Donkey Kong and Diddy Kong, and the two retain their abilities from Donkey Kong Country. As such, the game features the two Kongs available in gameplay, and each can be switched out when the player decides, but due to limitations only one Kong is displayed on a screen at a time. They must reach the end of the level in order to proceed to the next, until the end of the area where the boss is fought. Rambi the Rhinoceros and Expresso the Ostrich return, with their abilities carried over. Not much has changed with the two aside from Expresso's ability to defeat enemies such as Zingers by flying into them.

As with their previous adventure, the Kongs find a variety of enemies in the game. Most are from Donkey Kong Country, though some are new.

Bosses appear at the end of each world.

The Kongs encounter many types of items in the game, mainly carried over from Donkey Kong Country.

In addition, there are a few types of barrels found in the game, all carried over from Donkey Kong Country: 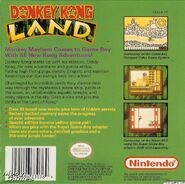 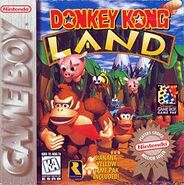 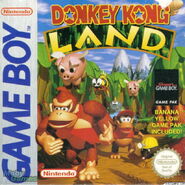 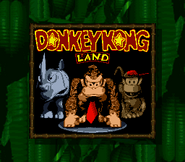 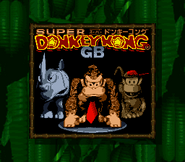 Game Over screen on the Game Boy. 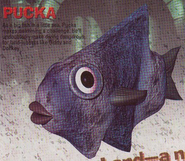