Donkey Kong Jr. Math (ドンキーコングJR.の算数遊び, Donkey Kong JR.'s Math Play in Japan) is an educational platformer game developed by Nintendo R&D2[1] and released by Nintendo in Japan on December 12, 1983 for the Family Computer, and later, in North America and Europe in 1986 for the Nintendo Entertainment System. It was the second game to feature Donkey Kong Jr.

Donkey Kong Sr. (later known as Cranky Kong) will hold up a sign, and Donkey Kong Jr. must find the numbers and math sign to get to that number. Once this is done, the player who finds the answer first will be given a point. Oddly there were two Donkey Kong Jr.s in this game. The second DK Jr. is controlled by the second player and possesses a pink palette swap.

An earlier version of the game was released first only in Japan in September 1983 as part of a collection called Donkey Kong Jr. + Jr. Sansū Lesson for the Sharp C1 Famicom TV[5]. This version possesses some differences and lacks some content when compared to the single game version. The same collection also contains the game Donkey Kong Jr.

Donkey Kong Jr. Math was also recreated as an obtainable item in the game Animal Crossing for Nintendo GameCube. In order to get it in the North American version of the game, the player must enter the Tom Nook's store, speak to Tom Nook, pick the options "Other things" and "Say code", and input "bA5PC%8JUjE5fj ljcGr4%ync5EUp". A couple in-game days later, a letter written by Tom Nook will be delivered to the player. Attached to it, there will be a present containing a NES console and the game cartridge for Donkey Kong Jr. Math as a single item. By the player setting the item on the ground and interacting with it, the game can be played.

Other means of getting the game Donkey Kong Jr. Math randomly are winning it as a prize in the Tom Nook's Lottery, purchasing the item at the Crazy Redd's store, and finding it as a buried item by other Villagers.

The game Donkey Kong Jr. Math was available on the Nintendo Wii via the Virtual Console in Japan on March 27, 2007, in Europe on April 20, 2007, and in North America on September 3, 2007. However, the service was discontinued on the Wii in January 2019, making impossible to purchase the game afterwards. 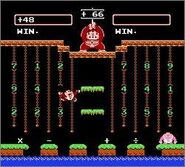 Gameplay screenshot as seen in the game Donkey Kong Jr. Math for NES.