Donkey Kong Jr. (also known as DKJ, DK JR. or Junior for short) is Donkey Kong Sr.'s son and the father of the modern DK, making him part of the second generation in the DK Lineage.

This retro arcade icon and enigmatic '80s main protagonist may have slight dwarfism and be a bit on the chubby side but DK JR. (while looking and acting youthful and comically punching modern DK despite being in his all grown up middle aged adult years in an official manga) also prides himself in his heroism and actively performs brave heroic acts showing his sense of justice, but as he grew up and got older and wiser he has not been in many games as a playable character. However he still makes numerous secret appearances roles and hidden cameos such as Mario spin-offs, Mario Clash, Super Mario Maker, Super Mario Bros. remakes, Donkey Kong remakes, Punch-Out!!, NES Remix, WarioWare, Animal Crossing, Tetris DS, and the Game & Watch Gallery series.

His first appearance was in the game Donkey Kong Game & Watch and first starring role was Donkey Kong Jr., where he makes it his own task to rescue his father from Mario.

He at least wears outfits like a White Leotard/Singlet/Onesie and White Shoes (while regularly using a hand-mirror to check on his looks) making him much more fashionable and gentleman-like than the original DK). The two still have a deep love and mutual respect for each other with Cranky being proud of his son and JR. is forever loyal to him.

Originally, he was heavily implied to be the father of the current Donkey Kong which was later confirmed on page 112 in the 2017's Playing With Super Power: Nintendo Super NES Classics eGuide, Super Mario Kart 16 Bits Tab, a book by Prima Games and officially licensed by Nintendo.

Gregg Mayles on Twitter in 2017 also confirmed that modern DK is Cranky's grandson, and the statement in DK64 was a mistake and an outlier not to be construed as literal since DK64 is the only game that has claimed this. Furthermore, not only is it common for "son/sonny/my boy" to be short for "grandson", it's also simply used by older people non-literally towards any younger males as a common figurative term (for a vague example: "son of the Kong Family") and form of endearment whether they're biologically related or not ("pappy/pops/old man" is generally used for "grandfather"), and it's possible Cranky raised DK "like a son" (confirmed in Donkey Kong Country and Donkey Kong Country Returns) instead of literally being his son. Another explanation is that Cranky calls DK "that undeserving son of mine" in a pun like sense, DK is his grandson, but as far as Cranky Kong is arrogantly concerned DK is not "grand" at all; hence Donkey being his "good for nothing son".

It should also be noted that there is no in-game dialogue/text nor manual/instruction booklet that ever explicitly states that DK is Jr., debunking the fan misconception. The Japanese version of DK64 says grandson; as does an official Japanese Nintendo Online Magazine that came out around a similar time mentions it, both of which directly contradict the outated fan notion; as that remains accurate to every other in-game reference that came out before and after DK64.

Donkey Kong Jr. (now a young adult) has appeared in the original Super Mario Kart for the Super NES as a playable character celebrating the 10th anniversary of his arcade game and his shared history with Mario. He is one of the heaviest characters in the game along with Bowser and like Bowser is a (in Junior's case friendly) rival to Mario.

In Mario Kart: Double Dash!!, JR. was originally going to be the partner to current Donkey Kong but was replaced by Diddy Kong, however JR. still makes a cameo appearance in Waluigi Stadium in the form of his fan club/fake doppelgangers/clones, while the real character is no where to be seen, his presence and impact are felt. Music from Donkey Kong Jr. appears during the first part of the DK Mountain/Dino Dino Jungle theme.

Donkey Kong Jr. appears in the 1994 Game Boy game Donkey Kong. Here, DK Jr. throws Poison Mushrooms and also pulls and pushes on switches/levers called Directional Switches used to either hinder or help Mario by activating/deactivating platforms. They are used to control conveyor belts, moving platforms and elevators. They can also be used to make bridges appear and disappear, as well as opening and closing gates.

It is shown in Stage 8-9 of Rocky-Valley that the plumber can lose a life when touching Donkey Kong Jr. Sometimes, Donkey Kong Jr. even appears out in the open and throws Poison Mushrooms. Finally, Mario got to stop him for good in Stage 9-4, where he locked him in a cage in a fashion similar to Stage 4 of the original Donkey Kong Jr. game. In the ending, Donkey Kong Jr. somehow managed to free himself and lay in wait as Pauline gave Mario a Super Mushroom to catch Donkey Kong Sr., and acted as soon as his father was calling for help, DKJ managed to save him. In the end, the group of characters take a photo together, implying they called a truce and are now peaceful towards each other.

Young Adult Donkey Kong Jr. also appeared in Mario's Tennis for the Virtual Boy (where he wears tennis shoes) and with time traveling shenanigans appeared as his younger self in Mario Tennis for the Nintendo 64 as an unlockable character. He is considered a Power character along with Donkey Kong, Wario, and Bowser.

Donkey Kong Jr. had his own fruit flavored cereal made by Ralston. Each box contained a free PEZ or 4 baseball cards inside.

Donkey Kong Jr. is not playable in the Super Smash Bros. series but he does make some form of appearances. Mr. Game & Watch's Down Aerial is a Key that references his arcade game Donkey Kong Jr.. Diddy Kong's White Alternate Costume does reference Junior's appearance in Donkey Kong Jr. Math

In Super Smash Bros. Brawl, Donkey Kong Jr. appears as two stickers. JR.'s trophy was going to be in the game, but it was scrapped.

In Super Smash Bros. Ultimate, Donkey Kong Jr. appears as a spirit. Music songs from his arcade game and the original Donkey arcade game were remixed and appear as selectable stage music.

In Donkey Kong Country: Tropical Freeze, Donkey Kong Jr. appears as a cameo at the end of the Aqueduct Assault level in the background inside a Wii U GamePad held high by the original Donkey Kong. He is referenced in the Secret Seclusion world where the theme that plays in the sky area is a different cover of the Donkey Kong Jr. music.

Artwork of Junior in his debut appearance with his Bell in Donkey Kong Game & Watch from the manual.

Jr.'s default sprite from the NES version of the game Donkey Kong Jr.. 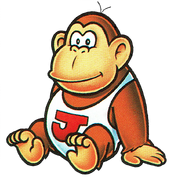 Donkey Kong Jr.'s cameo in the Wii U Gamepad in the background at the end of Aqueduct Assault, held high by the statue of the classic DK as a memorial to Junior.

Donkey Kong Junior in the first season of Saturday Supercade.