Donkey Kong Island has been the Kong Family's home and mainland since Cranky Kong and Donkey Kong Jr. migrated there after the events of the original Donkey Kong 3. Cranky retired, and eventually the Kong Family branched out. Donkey Kong III is the current island protector and has taken various journeys across the island with Diddy Kong.

Donkey Kong Island's latest appearance was in Donkey Kong Country Returns, however, it now appears drastically different than in previous appearances. It no longer appears in the shape of Donkey Kong's head, and now has a large Volcano protruding from it. The majority of the locales from Donkey Kong Country still match up well, however the region known as Gorilla Glacier no longer exists.This could be due to temperature issues turning it into a volcano. There is also a new Cliff world which features the first sign of extinct prehistoric life on Donkey Kong Island. The island is also now teeming with ancient temples, many of which appear to have been built by the Tiki Tak Tribe sometime before they were encased in the volcano. It is speculated that the emergence of this volcano may have been what drastically altered the terrain of the island.

This area makes a cameo in beach-themed racing courses in the 2003 build of Diddy Kong Pilot.

In the animated series based on the game, Donkey Kong Island was called Kongo Bongo Island and looked like a crescent island (similar to a banana) rather than the shape of Donkey Kong's head. However, it is believed to be the same island, but with a different name. Like Dinosaur Land in the Super Mario World cartoon, some location names were different on the show. For instance, Gorilla Glacier was called the White Mountains.

There are several neighboring islands of Donkey Kong Island. These include: 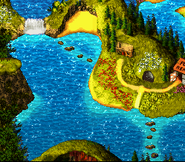 A frozen DK Island in Donkey Kong Country: Tropical Freeze
Add a photo to this gallery

Crystal Caves
Add a photo to this gallery

Retrieved from "https://donkeykong.fandom.com/wiki/Donkey_Kong_Island?oldid=59897"
Community content is available under CC-BY-SA unless otherwise noted.