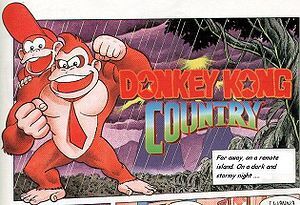 The Donkey Kong Country comic is a short comic adaptation of the game Donkey Kong Country. It is 12 pages long and was divided into three parts, each with four pages. Various DKC characters make appearances, however not every character was able to fit in. It was originally released in Germany's Club Nintendo comic sections (images used below were translated).

On a dark, stormy night, Donkey Kong and the Kong Family (including some unnamed look-alike apes to DK) are seen partying. One of the apes comments on how he would not like to guard the horde that night, however DK assures him Diddy Kong has the job. The comic then cuts to Diddy Kong, alone, upset that he is left by himself while the other Kongs are partying. Unexpectedly, King K. Rool appears, picks him up, and forces him into a DK Barrel.

The next day, Cranky Kong comes in to check on Diddy only to find the whole Horde empty. He calls Donkey Kong, who, realizing the situation, blames himself for this. He sets out to find his friend and reclaim his horde. Shortly after walking, he finds a lone DK Barrel in a bush, and realizes there's someone inside it, no other than Diddy Kong. Relieved and reunited with his pal, the two high-five and the two start their adventure.

Donkey Kong and Diddy continue their travels until they get surprised attacked by an Army. Diddy, who had been on DK's back, jumps off him and lands a countering jump on the Army, knocking it out. The two then are seen swinging from a vine, only to narrowly avoid a Zinger nearby. Donkey Kong calls the Zinger a "muck bee", offending it, and the Zinger prepares to attack. Before it can do so however, DK launches a surprise kicking attack, hurting it and bending it's stinger.

After, the Kongs meet Candy Kong, who kindly lets them borrow Squawks for exploring a dark cave. In the cave, a lone blue Kritter is seen, and is alarmed by their presence. The Kritter then gets frightened by Donkey Kong's massive shadow produced by Squawk's lantern, and while open, is defeated by a Wooden Barrel. Finally, the trio exit the cave, moving on with their adventure. Donkey Kong and Diddy say their farewells and thank you's to Squawks as they go into dense jungle.

Enguarde is now seen with Donkey and Diddy Kong as they progress through a water stage. Shortly they encounter a Croctopus, but the foe is easily handled by Enguarde's bill. A group of Squidge nearby prepare to take over when the "Chomp police" come in. The "police" try to assert order and find the "suspects", but a dispute among the underwater creatures over who should handle the Kongs leaves them vulnerable to a TNT Barrel thrown by Donkey Kong. The explosion launches the Kongs out of the water and onto the Gangplank Galleon.

On the Galleon, the heroes demand their bananas back. King K. Rool comments on how seeing a talking ape with a tie makes him want more sleep. Krusha and Klump cameo in the background at that point. K. Rool starts off with throwing his crown towards the Kongs, but he misses. While open, the two perform a teamed attack- Donkey jumps, letting Diddy jump off him and gain some air time, while he lands and rolls into K. Rool, and Diddy lands on him, knocking him out. The two emerge victorious and reclaim their bananas. The ending also hints at the game's sequel.