Donkey Kong 3 (ドンキーコング3, Donkī Kongu Surī in Japan) is a shooter game developed by Nintendo Research & Development 1[1] and Intelligent Systems[2], and released by Nintendo for arcades in 1983. It is the fourth game in the Donkey Kong classic series, following the game Donkey Kong Jr. Math. Although it is a sequel, this title is a departure in gameplay from previous titles.

Starring Stanley the Bugman (known from the Game & Watch game Greenhouse[7] as the Fumigator), Donkey Kong Sr. has taken refuge in his greenhouse and it is now up to Stanley to stop the Kong from stirring up any more insects that will soon destroy his flowers. Stanley and his exterminator expertise saves his flowers and defeats Donkey Kong Sr. with his bug spray.

The game is a shooter which incorporates ideas from Galaga[8], and Space Firebird[9] an earlier Nintendo arcade game, and adapts them into a new setting.

Donkey Kong Sr. hangs from vines at the center of the screen, and the player-controlled Stanley the Bugman runs and jumps on platforms beneath him. Stanley can fire bug spray at both Donkey Kong Sr. and insects flying around the levels. Some of the flying insects attempt to pick up the flowers at the bottom of the screen and carry them away. This decreases the bonus at the end of the round.

A level is completed by continuously using bug spray on Donkey Kong Sr., forcing him to the top of the screen, or by killing all of the bugs. A Super Spray Can, visible on the vines, drops to the bottom of the screen when Donkey Kong Sr. is sprayed past it. The super spray only lasts for a limited number of shots, but it pushes Donkey Kong Sr. upward at a much faster rate, making it easier to complete the level. It only appears at the start of each life.

There are three levels (blue, gray and yellow greenhouses) which repeat in a fixed sequence.

Donkey Kong 3 was ported for the Family Computer in Japan on July 4, 1984, and later for the Nintendo Entertainment System in North American in June 1986 and in Europe on September 15, 1987.

In 1984, Hudson Soft[10] created a sequel to Donkey Kong 3 and released it on the Japanese-only NEC PC-8801, NEC PC-6601 and Sharp X1 under the name Donkey Kong 3: Dai Gyakushū (ドンキーコング3 大逆襲, Donkī Kongu Surī Dai Gyakushū, lit. Donkey Kong 3: The Great Counterattack). This sequel game is significantly different from the arcade original or its Famicom/NES port. While the objective to shoot Donkey Kong Sr. up in the air remains, this version features twenty new outdoor backgrounds such as a bridge, Planet Saturn, a desert, a pyramid or a highway. After the player has completed the twentieth stage, the game loops back at stage 21. Stanley the Bugman can only move from left to right and is no longer able to jump.

A VS. series Game & Watch version of the arcade game has different gameplay. In this version, player one controls Stanley the Bugman and a computer player (or player two) controls Donkey Kong Sr. in a duel against each other using exterminating spray cans to move the bees to the other side of them to make the bees sting their opponents. The player can only hold up to three amounts of spraying liquid in their spray cans. On single player mode, the higher player one as Stanley scores, the faster the spraying liquid on the side of computer player as Donkey Kong drops.

The Famicom/NES version of the game Donkey Kong 3 can be acquired as an interactive item in the game Animal Crossing for Nintendo GameCube. In the North American version, the player must enter the Tom Nook's store, speak to Tom Nook, pick the options "Other things" and "Say code", and input "4f8wOToj5CNGT2 wc2Y9nbTXVaJxW". Then the player will receive a letter from the character after a couple of in-game days. A present will be attached to the letter, containing the single item for the game Donkey Kong 3, a NES console and a cartridge. After putting down the item on the ground and interacting with it, the player can play the game.

Another way of receiving Donkey Kong 3, alongside the item for the game Donkey Kong Jr., was as Nintendo Giveaways for Animal Crossing.

A new version of Donkey Kong 3 was included in the game Game & Watch Gallery 4 for the Game Boy Advance, but featuring Mario in place of Stanley and a Boo and a Fireball in place of the bees.

The Famicom/NES version of the game Donkey Kong 3 was re-released on the Nintendo Wii via the Virtual Console in North America on July 14, 2008, in Japan on July 23, 2008, and in Europe on January 9, 2009. However, the game cannot be purchased after January 2019, when the service was discontinued in the Wii. 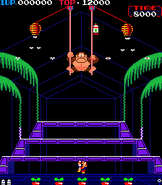 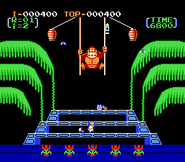