Diddy Kong Pilot is a canceled Diddy Kong based video game for the Game Boy Advance, supposedly to be a sequel to Diddy Kong Racing. Not much else is known about this game, besides the fact that it was actually re-developed into Banjo-Pilot.

Luckily, on September 15, 2011, a YouTube and Rare member Transparentjinjo posted a gameplay video here of this game on how progress was like while still in development as of September 7, 2001.

Diddy Kong Pilot was supposed to be the next game in the Diddy Kong Racing line, to be released for the Game Boy Advance. It was presumably the sequel to Diddy Kong Racing, due to the screenshots of flight gameplay very similar to the previous game, though exclusively flying likely to the Game Boy Advance's limitations. The character cast returns with Diddy Kong from the previous game, and was to include Donkey, Dixie, Cranky and an unnamed Kong know as "Redneck Kong", and later replaced by Candy Kong. Other Kremling characters in the game would be Kritter and King K. Rool.

Aside that, the game was also going to have a motion tilt sensor, much like the game Yoshi Topsy-Turvy. As the game was not far in development, only the title screen has music and most of the courses are unfinished. Also, some courses are not entirely functional. The modes in the game include a Racing mode, a Story mode, a Dogfight mode, a Battles mode and a Clock Race mode. In the Options menu, there is only the option of whether to use tilt controls or not. The story selection screen has Back to the Light, K. Rool's Gold and King of Kongs options. Each character would also feature his/her story to play through.[3] 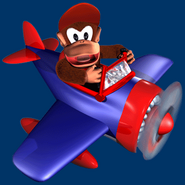 The Racing option on the title screen.

The Options menu for Diddy Kong Pilot. Note the only options are D-Pad and Tilt Motion control usage.