The DK Rap is a rap song about Donkey Kong and his friends that plays during the introduction cutscene of the game Donkey Kong 64. It was written by Grant Kirkhope[1], and performed by George Andreas and Chris Sutherland.

The DK Rap was originally written as a joke (as stated by Kirkhope on his own website[2]), however it made it into the opening cutscene of Donkey Kong 64.

The DK Rap is very infamous for its considerably corny lyrics, particularly Lanky Kong's verses, and the fact that it contains the word "hell" in Chunky Kong's verses, despite being featured in an E-Rated game. A possible reasoning for this is that Rare, the game's developer, is based in the United Kingdom, where "hell" is not considered profanity and was also considered a slang term in the used context.

The DK Rap returned in the game Super Smash Bros. Melee, performed here by James W. Norwood Jr., where it became the musical score for the Kongo Jungle stage[3]. The third and fifth verses describing Tiny Kong and Diddy Kong were sung faster, and the word "hell" was replaced with "heck". It is possible this was one of the main reasons for re-doing the rap. The DK Rap is also reused in the game Donkey Konga, as one of the game's many songs. It also came back in the game Super Smash Bros. Ultimate, but with Lanky and Chunky Kong's verses removed.

So they're finally here, performing for you,
If you know the words, you can join in too,
Put your hands together, if you want to clap,
As we take you through, this monkey rap!

He's the leader of the bunch, you know him well,
He's finally back to kick some tail,
His Coconut Gun can fire in spurts,
If he shoots ya, it's gonna hurt,
He's bigger, faster, and stronger too,
He's the first member of the D.K. crew!

This Kong's got style, so listen up dudes,
She can shrink in size, to suit her mood,
She's quick and nimble when she needs to be,
She can float through the air and climb up trees!
If you choose her, you'll not choose wrong,
With a skip and a hop, she's one cool Kong!

He has no style, he has no grace,
Th-th-th-this Kong has a funny face,
He can handstand when he needs to,
And stretch his arms out, just for you,
Inflate himself just like a balloon,
This crazy Kong just digs this tune!

He's back again and about time too,
And this time he's in the mood,
He can fly real high with his jetpack on,
With his pistols out, he's one tough Kong!
He'll make you smile when he plays his tune,
But Kremlings beware 'cause he's after you!

Finally, he's here for you,
It's the last member of the D.K. crew!
This Kong's so strong, it isn't funny,
Can make a Kremling cry out for mummy,
Can pick up a boulder with relative ease,
Makes crushing rocks seem such a breeze,
He may move slow, he can't jump high,
But this Kong's one hell* of a guy! (*Replaced with "heck" in later versions of the song.)

Huh!
C'mon Cranky, take it to the fridge! 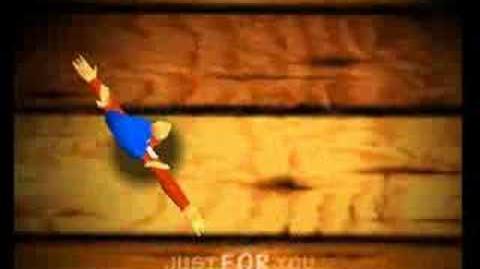