"A very large coin with 'DK' on it, each level has one, cunningly hidden by Cranky. Collect these to increase your status as a video game hero."
—Wrinkly Kong in the game Donkey Kong Country 2

DK Coins are special coins found in some games of the Donkey Kong series.

DK Coins first appear in the game Donkey Kong Country 2. According to Wrinkly Kong, they have been hidden around the Crocodile Isle by Cranky Kong. A single DK Coin can be found in every regular stage outside of the Lost World. Most of the DK Coins are located floating in the air someplace inside the stages. However, in rare occasions, these coins are placed inside Bonus Rooms or as a prize of the End of Stage Targets. In the latter, the player must use good timing when hitting the target in order to receive the DK Coin. In the Lost World, instead of Kremkoins, DK Coins are earned by clearing Bonus Rooms and defeating Kaptain K. Rool in the boss stage Krocodile Kore.

There is a total of forty DK Coins in the Super Nintendo Entertainment System version of Donkey Kong Country 2, and sixty-eight coins in the Game Boy Advance version. In the GBA version, new DK Coins are earned by the player winning races of the Expresso Racing minigame in the Cranky's Huts and clearing missions of the Gyrocopter in each location of the Funky's Flights II. In the maps of both game versions, stages and worlds, including other places in the GBA version, where the player has collected/earned all DK Coins will display the coin icon following the title of the locations.

In both game versions, DK Coins are also related to the percentage rate of completion. The player must collect all DK Coins in order to reach 102 percent in their game file.

In the game Donkey Kong Land 2, single DK Coins can also be found floating in the air inside regular stages outside of the Lost World of the Crocodile Isle, in similar way to the SNES version of Donkey Kong Country 2. DK Coins also replace Kremkoins as prizes of Bonus Rooms of stages of the Lost World. However, there are no DK Coins in the End of Stage Targets, because they lack prizes in Donkey Kong Land 2. Also like in Donkey Kong Country 2, the titles of stages and worlds where the player has collected all DK Coins will be followed by a coin icon on the maps of the Crocodile Isle.

Despite Cranky Kong making no appearances in the game, the Video Game Heroes contest is still present in Donkey Kong Land 2, being featured during both endings. Similar to Donkey Kong Country 2, Diddy Kong competes against Mario, Yoshi and Link. In the contest, Mario has collected thirty-nine DK Coins; Yoshi, twenty-nine coins; and Link, nineteen coins. Once again, the player must find all DK Coins in the game in order to Diddy to earn the first position.

There is a total of forty DK Coins in Donkey Kong Land 2. They are also required to be collected in order to the player to reach the percentage rate of completion of 100 percent in their game file.

In the game Donkey Kong Country 3, there are 41 DK Coins (whereas there are 46 in the Game Boy Advance version). Each stage has one DK Coin, which is held by an enemy named Koin. He can be eliminated when he is hit by a Steel Keg. When a DK Coin has been collected in a stage, a yellow pennant will appear on top of the Stage Flag of that stage on the world map. The last DK Coin is obtained after beating Baron K. Roolenstein in Knautilus. Once the Kong has found all the DK Coins, they can go over to Funky's Rentals and Funky will build a Gyrocopter.

In the game Donkey Kong 64, DK Coins appear in the Mine Cart challenges. Unlike other games, the DK Coins are golden with the DK emblem on both sides in red, and no cut-out areas.

In the game DK: Jungle Climber, each stage has one DK Coin. They are collected to unlock some cheats that arent seen anywhere else. 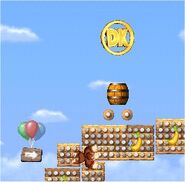 Donkey Kong aproaching a DK Coin inside a stage, as seen in the game DK: Jungle Climber for DS.

DK Coin inside a stage as seen in the game DK: Jungle Climber for DS.