DK Barrels first appeared in Donkey Kong Country. Breaking one would summon a defeated Kong, making him/her playable. Other than freeing a hurt Kong, it functions somewhat like a Vine Barrel, where it smashes upon contact with anything, including the ground. However, there are aerial DK Barrels that break upon jumping contact in a Kong's inside. In the early Donkey Kong Country games, there are cheats to disable DK Barrels (along with Star Barrels) to increase the games difficulty.

In Donkey Kong Country: Tropical Freeze, usually, there are no DK Barrels in the single player mode, except as an icon at some loading screens. Instead, there are DD, DX and CK Barrels to break and summon Diddy, Dixie and Cranky Kong, respectively, as assist Kongs for Donkey Kong. These barrels can be found inside levels and can be also purchased from the Funky Kong's Fly 'N' Buy shop. Besides summoning a Kong and recovering the characters' hearts after they are broken, like in Donkey Kong Country Returns and Donkey Kong Country Returns 3D, these barrels also refill the air meter completely when the heroes are underwater. In some levels, there are some barrels that will circle throughout insignias before the player picks them up, allowing to choose which character to summon. Ground-pounding nearby a circling character barrel will make it to stay at the current insignia, making easier to pick which assist Kong to summon.

However, when playing any level in the multiplayer mode, all DD, DX and CK Barrels are replaced by regular DK Barrels. The DK Barrels serve their original function of allowing a player to summon other player's Kong, after their character is defeated, by breaking the barrel. In the same mode, DK Barrels also recover hearts to both characters and refill their air meters, even if they are separated underwater. When only one Kong is present, the player with the missing character can also spend one single extra life at any moment to summon a dropping DK Barrel from the top of the screen. The DK Barrel, being hold by a red balloon, must be touched by the present Kong to summon the other one. If this Kong fails to reach the barrel, it will keep dropping down and disappear below the screen, wasting an extra life for nothing. While the dropping DK Barrel is still at the screen, holding the "Y" button on the Pro Controller[1][2]/Wii U GamePad[3]/Joy-Con[4] or moving the Wii Remote[5]/Joy-Con at the direction of the barrel will immediately draw it towards the present Kong, even if the barrel is already below the character.

In the Hard Mode, where the player can control only one character with a single heart container as health, all DD, DX and CK Barrels are also replaced by regular DK Barrels. In this unlockable mode, the DK Barrels only serve as throwable weapons or to refill the air meter when underwater.

In the Funky Mode, available only in the Nintendo Switch version of Donkey Kong Country: Tropical Freeze, all character barrels are replaced by FK Barrels, allowing Funky Kong to recover all his hearts and refill his air meter inside water after breaking these barrels.

In Donkey Kong 64, Tag Barrels had a similar function to DK Barrels. Tag Barrels were used to switch between playable Kongs, for different Kongs were needed to collect all of the bananas, Banana Medals and Golden Bananas.

The DK Barrel has made various spinoff appearances since.

Donkey Kong Country for GBA
"Break one of these to keep the other Kong ready and waiting. He'll take over when your current Kong takes a hit, or you can press the L Button to swap them at any time."

Donkey Kong Country 2 for GBA
"Here's where you'll find your partner if he or she isn't already by your side. If both characters are already in play, you won't be able to break this Barrel when it's in mid-air."

Donkey Kong Country 3 for GBA
"Here's where you'll find your partner if they're not already with you. If you already have both Kongs, you won't be able to break the DK Barrels that float in mid-air."

Animated sprite of the DK Barrel from Donkey Kong Country for SNES.

Sprite of the DK Barrel from Donkey Kong Land series for Game Boy.

Sprite of the DK Barrel from Donkey Kong Country for Game Boy Color. 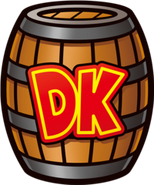 Unofficial artwork of a DK Barrel.