DK: King of Swing is a puzzle/platformer game developed by Paon and released by Nintendo on February 4, 2005 for the Game Boy Advance. It is the predecessor to the game DK: Jungle Climber.

Inside stages, the playable characters usually start on the ground, being capable of moving left and right, and jumping. The game mainly uses the "L" and "R" buttons on the Game Boy Advance to control each hand of the playable characters in order to grab on pegs of top-down view panels. When the characters are holding to a single peg, they will rotate around it. The player can quick climb up panels at any direction by using timing and alternating between the hand grabs. By the player grabbing on two pegs at the same time for a few seconds and releasing them, the characters will flash and execute a short charged attack head on, move used for jumping, destroying obstacles or harming regular enemies upon contact.

Despite its simplistic design, the game has surprises hiding around every corner. The main objective is to reach the end of the stages while collecting bananas and DK Medals, and moving past enemies, while sometimes the player having to manipulate the environments in order to do so. The game also features multiplayer modes with score and time events of racing and battle between four characters.

This game takes place at the time of the Jungle Jam Tournament, a festival where who finds more DK Medals will be declared the winner and the Jungle Hero. On the day before the tournament, Cranky Kong is explaining about it to his grandson, Donkey Kong, next to a barrel full of DK Medals. However, King K. Rool arrives at the scene on his hovercraft and steals all the medals. Donkey Kong is told to recover them, so the primate sets off to explore the jungle. K. Rool drops some DK Medals during his escape.

At the jungle, the ape traverses caves, treetops and pyramids in order to arrive to the temple of Congazuma, where the Kong defeats the idol and obtains one of the stolen gold DK Medals.

Donkey Kong then travels to the Wild West and goes through cactus gardens, mines, canyons and tornadoes. He finally encounters Fire Necky, which must be defeated through the hurling of stones. The ape emerges victorious.

The Kong goes underwater and crosses reefs, sunken ships, water falls and water caves. The banana-loving ape eventually comes across Davy Bones, who must be grabbed by the tail and pushed into spikes in order to be defeated. After being defeated, it releases another gold DK Medal.

Donkey transverses through an icy tundra where he crosses cold forests, icy canyons, cold ruins and an ice castle. The ape then arrives at Sassy Squatch's lair, where he has to climb a precarious mountain while evading the monster's attacks. Sassy Squatch releases a gold DK Medal after being defeated with bombs thrown into its mouth.

Finally, Donkey Kong breezes into the King Kruizer III in search of King K. Rool. The Kong advances through the Artillery, Hull and Engine, the three main parts of the K. Kruizer III full of dangerous jumps, mechanical threats and ruthless enemies. The primate then confronts his nemesis in a final battle. K. Rool and Donkey Kong have a climbing race. Donkey wins, but K. Rool mocks then by saying that was just a warm-up. After this, the real battle begins, and the Kong must hit K. Rool with his charged attacks while evading the boss' attacks. The hero defeats the Kremling King, and he reclaims the final gold DK Medal.

Donkey Kong then takes the rest of the DK Medals on K. Rool's hovercraft, flying home shortly after, leaving the King Kruizer III in pieces behind him.

Adventure is the main mode of the game, where Donkey Kong is the only playable character. This mode features five worlds, Jungle World, Wild West World, Aqua World, Ice World and the K. Kruizer III, each with five stages. In every regular stage (except the very first) at least one DK Medal, either bronze or silver, and a Crystal Coconut can be found. By defeating bosses, the player is reward with gold DK Medals. Some stages include Bonus Barrels, in which the player can collect all bananas on-screen in order to receive a Crystal Coconut.

The Single-Player Jungle Jam mode features five different events. Each event has different courses that can be unlocked through DK Medals collection. Players can choose to play as one of four default characters, including Donkey, Diddy, Dixie and Funky Kong, and later as one of the unlockable ones, such as Kritter, Wrinkly Kong, King K. Rool and Bubbles. Different characters have different Jump and Attack stats, so choosing which character to use for a specific event can have impact on the outcome.

This event consists of five courses of climbing pegs to reach the top of the stage the fastest. The first course is a straight vertical stage, full of pegs to which to climb through. The second one has an emphasis on jumps, by having panels of pegs separated by a big gap. The third course features small panels, making it easier to miss successful swings. The last course is an underwater level, which has singular pegs all over the way, obligating the player to make precise jumps and swings.

This event is composed by four courses, and it has the same goal as Climbing Race, the main difference being the presence of obstacles that block the way or makes things more complicated. The opponet must evade or destroy these obstacles in order to reach the goal first. The first course features three even rows of crates placed in the way. Each character must destroy the crates in their way to keep going and reach the goal. The next course features moving panels, which increases the precision required for the jumps. The third course features crates again, but placed after wide gaps or in tight panels, escalating the difficulty up.

This event consist of three courses, and it has the same mechanics of the final boss battle against King K. Rool in the Adventure mode. The character must successfully hit their opponents more times than the others by using charged attacks. The character that hits the most is the winner. The first course takes place in a plain mosaic of panels, similar to K. Rool's boss stage. The second course is almost identical, except for the addition of spikes in the walls and a moving spiked iron ball in the floor.

This event consists of two courses where the objective is to destroy the greatest amount of barrels in under forty seconds. The characters must arrive and destroy the first barrel than the next ones. In order to do so, barrels will spawn in different locations after they get destroyed, so players have to predict roughly where the next barrel will appear. The first course takes place in an even panel of pegs, while the other course takes place in four separate panels.

This last event is unlocked after finding all twenty-four DK Medals during the Adventure mode, and it has only one course. The game is a turf war between the characters, each time a opponents grabs a panel of four pegs, it turns into a specific color. The goal is to get the most colored panels at the end of the game, trying to cover the biggest area while impeding other characters' hands to reduce it.

It features the same events as the Single-Player Jungle Jam mode, but it has limitations in the courses of the events depending on whether multi-pak multiplayer or single-pak multiplayer is being used via a Game Link Cable[2] between GBA consoles.

In order to access the password screen, at the main title of the game, the player must press and hold "Up", "L" and "B" buttons and then press the "A" button. At the next screen, passwords composed by eight numbers can be entered. These passwords affect all three game files, and their effects are permanent, even after the game files are erased.

European/Australian logo of DK: King of Swing for GBA. 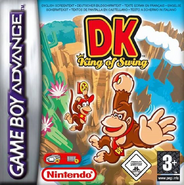 European/Australian boxart of DK: King of Swing for GBA. 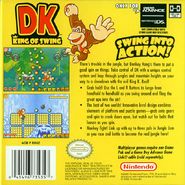 North American boxart (back) of DK: King of Swing for GBA. 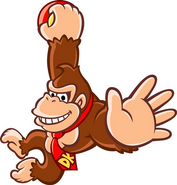 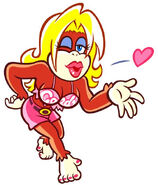 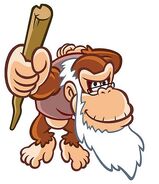 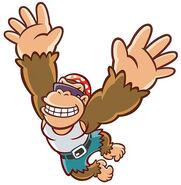 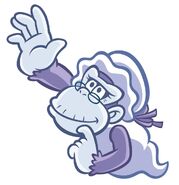 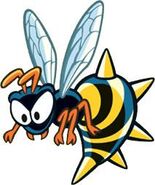 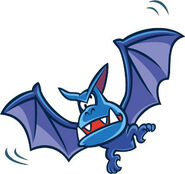 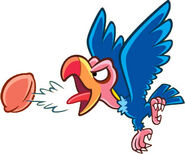 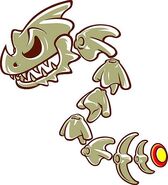 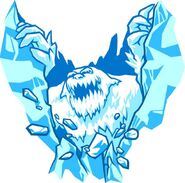