DK: Jungle Climber, known in Japan and Europe as Donkey Kong: Jungle Climber, is a puzzle/platformer game developed by Paon and released by Nintendo on August 9, 2007 for the Nintendo DS. It is the sequel to the game DK: King of Swing.

Donkey Kong and his Kong Family go on vacation on Sun Sun Island. Soon Cranky Kong notices a giant banana on the summit, which he tells Donkey Kong to go to it. When making it to the top, Cranky, Diddy and Donkey Kong and the primates notice King K. Rool and some Kritters going into a mysterious portal. Believing the Kremling Krew is up to no good again, Cranky asks where giant banana went. Suddenly the Kongs are attacked by a Banana Spaceship. After Donkey Kong defeats the spaceship, Xananab, an alien, comes out of the destroyed spaceship, where they apologizes to the Kongs as it thought they were Kremlings. The alien introduces himself and tells the Kongs that King K. Rool had stolen his Crystal Bananas, which the villain can use for his evil plan. Xananab also mopes that it cannot pursue the Kremlings with his spaceship destroyed. Accepting the blame for that, Donkey Kong knows that he has to retrieve the Crystal Bananas, which Xananab is thankful for as it joins the Kongs on their journey.

Some time later in the Lost Island, Donkey and Diddy Kong must recover a device, called the Spirowarp, which allows Xananab to open a wormhole for them. Going through the wormhole, they end up at the Glass Labyrinth. Exploring the place, Donkey Kong eventually stands in front of a mirror, creating a mirrored version of himself, though Diddy Kong cannot join him. A few rooms later Donkey and his image stand in front of mirrors which allows Diddy Kong venture with him again. After recovering another Spirowarp, the Kongs go back into another wormhole, returning to the island. Later, Donkey and Diddy Kong go to the ruins, and make it to the top of the island where Xananab opens a wormhole to the Toybox. There, the primates and the alien finally catch the Kremlings up. But K. Rool sends a Kritter powered by a Crystal Banana to stall the Kongs while he escapes. The Kritter absorbs toys and becomes the boss dubbed "Toyface", to whom Donkey Kong defeats and claims his first Crystal Banana.

The group travels to a cold and hot island called Chill 'n' Char Island. They traverse through a waterfall, a bramble and a blizzard. Eventually, Donkey and Diddy Kong have to climb some icy cliffs, going through hard ice. Later and after recovering another Spirowarp, Xananab opens another wormhole to the Glass Labyrinth again. There, the Kongs recover another Spirowarp again, and return to the island through another wormhole. Next, Donkey and Diddy Kong go inside a fiery volcano. After quickly escaping the rising lava, they find out that K. Rool built a lair at the top of the volcano called the Kremling Dock. Going into the place, K. Rool, now enraged about the Kong's persistance, announces that he had set a trap for them. Xananab and the Kongs fall into a subterranean cave where they fight another Crystal Banana-powered Kritter. The Kremling turns into a dragon from the picture on a stone in the background. After defeating the "Dragon", the heroes claim their third Crystal Banana.

Then, K. Rool reveals the King Kruizer IV, his new spaceship. Using the ship and the Crystal Bananas, the villain intends to conquer the entire universe and says he will start by taking over the Planet Plantaen, Xananab's home planet to the alien's horror. The king leaves. Feeling powerless to stop K. Rool and seeing the ship fleeing, Diddy Kong suggests they quickly head at the top of High High Island to reach the ship before it flees to space. Even after climbing and reaching the top of the rocky mountain, Donkey and Diddy Kong are too late to jump on the spaceship. But Cranky Kong gives them a booster barrel to fly into space. By avoiding mines dropped by the ship, the Kongs eventually catch the King Kruizer IV. After invading the ship and advancing through its decks, the primates reach K. Rool, but he refuses to surrender the remaining Crystal Bananas. He sends his last Crystal Banana-powered Kritter on the heroes. The Kremling now pilots a fully functional Mega AMP. But the Kongs manage to destroy the mech once and for all, and they get another Crystal Banana. Finally, the group corners K. Rool, who is enraged about how quickly they destroyed his Mega AMP again. Now believing he has nothing to lose, K. Rool opens a wormhole to Planet Plantaen. Donkey, Diddy, Cranky Kong and Xananab give chase to him.

Donkey and Diddy Kong end up in the Glass Labyrinth for the final time. Donkey stands in front of another mirror, having to match with his mirrored counterpart again to progress. Later, Donkey and Diddy Kong go through another wormhole and end up at the Toybox again. Going across the place, they find another wormhole and go through it to the Planet Plantaen. On the planet, a wormhole opens and K. Rool appears. The lizard is soon followed by Donkey, Diddy, Cranky Kong and Xananab. Cranky realizes that King K. Rool has made it to the banana planet and that they have no choice but to fight K. Rool. After reaching K. Rool, Donkey and Diddy Kong face and defeat the villain. But K. Rool uses a last Crystal Banana to power and turn himself into a giant. By evading meteors, fireballs, mines, climate powers and giant claws, Donkey and Diddy Kong still emerge victorious and reclaim the last Crystal Banana.

Xananab thanks the Kongs for getting all the Crystal Bananas back and the saving Planet Plantaen from K. Rool's evil clutches. It offers the apes all bananas they desire. During the credits, the Kongs are shown celebrating with Xananab's compatriots, eating many bananas and putting the Crystal Bananas in their resting place. The Kongs say farewell to their good friends and Xananab uses a Banana Spaceship to take them back home. They go back to their homeworld while towing a tied K. Rool behind the spaceship.

Several minigames appear in this game. During stages, they are present as Bonus Games to win extra lives. The minigames can also be unlocked and accessed in the Challenge mode, including four difficulty levels. 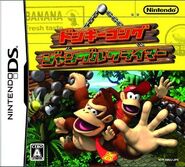 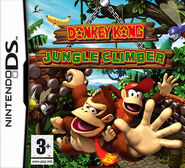 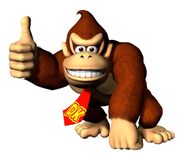 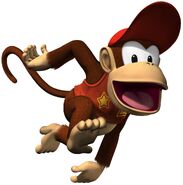 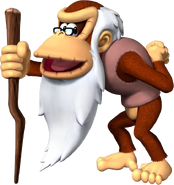 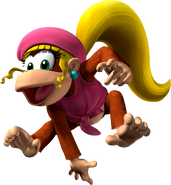 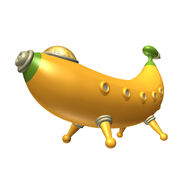 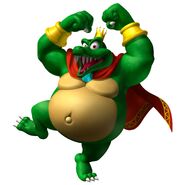