Crystal Caves is the sixth world in Donkey Kong 64.

As the name of the world suggests, it is a cave made of crystals. A giant Kosha lurks in the highest part of the cave, raining stalactites down on the unsuspecting Kongs. The area has all the Kong shops in it. The boss is a rematch with Army Dillo, the boss from Jungle Japes.

As stated above, there is a giant Kosha that causes stalactites to fall on the Kongs. In order to stop the oversized Kremling from dropping more, the player must first get Chunky's second banana (see below). After that igloo is destroyed, Tiny can then use the Monkeyport pad (must learn from Cranky first) to teleport to the area with the giant Kosha. She should then defeat the giant Kosha like she would any other Kosha. If she falls off the platform, she will respawn at the beginning of Crystal Caves. Unlike other enemies, the giant Kosha will not respawn after being defeated, leaving the rest of Crystal Caves to be explored without the constant threat of falling stalactites.

The exterior of the large cabin.

Inside one of the cabin's rooms.

Inside one of igloo's rooms.

The interior of the ice castle.

The secluded area of the world where the giant Kosha dwells. 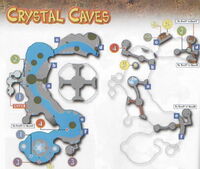