Croctopus are a species of octopus-like fish dwelling in the underwater levels of Donkey Kong Country. Their main attack pattern is to swim in set paths while spinning rapidly, with their poisonous tentacles extended. Croctopus are loosely based off the real-life Blue Ringed Octopus.

Unlike most underwater enemies, the Croctopus is completely invincible, as even Enguarde is incapable of defeating them. There are two types of Croctopus; purple ones who usually just swim in circles repeatedly, blue Croctopus that are dormant until passed. They will then give chase. As such, they are feared, and the real only way to escape defeat is to run, or swim, rather, out of their way. They appear mainly in the last part of Coral Capers and a majority of "Croctopus Chase."

Croctopus make an appearance as enemies to Donkey and Diddy Kong in the German Club Nintendo comic adaptation of DKC. It attacks with its usual spinning tentacles however Enguarde easily manages to defeat it, as opposed to being hurt in-game. 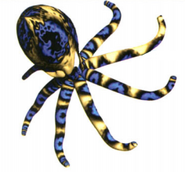 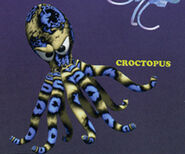