"Well done, Diddy, m'boy! Who'd have known you'd be able to rescue that lazy grandson of mine and dump K. Rool in his own filthy island?"
—Cranky Kong in Donkey Kong Country 2 GBA

The Crocodile Isle is a high mountainous island with carved crocodile heads up and down. The landscapes of this island contain a huge number of swamps, underground volcanoes, brambles that spread all over the island, ghost town,[1] cavernous glaciers formed by altitude and a lost civilization where the Kremlings were born.[2]

Under Kremling Krew's power, a fortress was established where K. Rool would rule the entire island and an amusement park for his minions to fun.[3][4] In contrast to neighboring island Donkey Kong Island which is ecosystemically natural, Crocodile Isle is a gloomy and dark because from pollution and waste by the K. Rool's dictatorship.[5] This is demonstrated by dead trees, mining, garbage and toxic waste which became the island completely barren.

This island was explored for the first time by Cranky Kong where he has all the knowledge here.[6][7] This fact also explains by Cranky himself about his knowledge from Lost World and Kremkoins role.[8] Some members of Kong Family as Dixie Kong and Funky Kong mentioned the name of the island only, but never explored before.[9][10]

In Donkey Kong Land 2, Crocodile Isle ends up being brought back up to the surface by Kaptain K. Rool, together with all the inhabitants. Due to its sinking, the island is somewhat ravaged. The most notable difference on the island is that Crocodile Cauldron and Krem Quay have fused together to create Krem Cauldron. Additionally, the volcano in Krocodile Kore no longer pumps out energy. At the end of this game, Crocodile Isle once again ends up sinking.

Crocodile Isle is also the home of the Blast-O-Matic in Donkey Kong 64.

In the obscure Donkey Kong comic Bumm-Badabumm Im Urwald, Crocodile Isle never made a direct appearance, though several locations ventured through in the comic, such as a Krochead and crashed ship filled swamp, along with the "Lost Land (Lost World)" are obviously based off areas of Crocodile Isle. 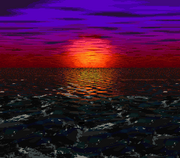 End of Crocodile Isle in background 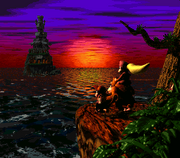 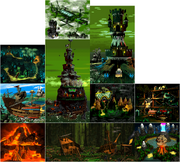 Crocodile Isle's maps in Artwork
Add a photo to this gallery

Hideout Helm
Add a photo to this gallery

Retrieved from "https://donkeykong.fandom.com/wiki/Crocodile_Isle?oldid=62586"
Community content is available under CC-BY-SA unless otherwise noted.