Donkey Kong Wiki
Register
Don't have an account?
Sign In
Advertisement
in: Barrels, Donkey Kong 64, Articles in need of infoboxes

Refer to the photo to the right; all numbers match that of the photo.

1: This Training Barrel trains Donkey Kong's ability to swim. He is given 60 seconds to collect a DK Coin, located at the bottom of the training stage. 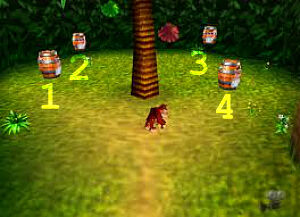 4: This Training Barrel trains Donkey's ability to jump on/off of and swing on Vines. He is given 60 seconds to climb up the tree and swing on the vines to collect a DK Coin.

The following quotes are quotes made by Squawks the Parrot, instructing the player what to do in that certain Training Barrel.

Refer to the photo above; all numbers match that of the photo.

1: "SQUAWK! Press the Z button to dive underwater. Then press and hold the A button or the B button to swim at different speeds. Pressing the Z button will act as a water brake to slow you down. Prove yourself by collecting the coin at the bottom. BWARK!"

2: "SQUAWK! Pick up the Oranges and hold the Z button then press the right C button to throw them. Just throw 5 Oranges and you're done in here. BWARK!"

4: "SQUAWK! Press the A button to jump from one vine to another and the R button when holding vine to face the other way. Press the Z button to drop from a vine. Now go and collect the coin at the end of the vines. BWARK!"