"Hey boy! Can you believe the shack they stuck me in?!"
—Cranky Kong

Cranky's Cabin is Cranky Kong's house. It is a general tip service where Cranky will often share some of his wisdom with Donkey Kong or Diddy Kong, though he is infamous for his random ranting about how times were so different in games back in his day.

This area first appears in Donkey Kong Country. When the Kongs enter the Cabin from the map screen, Cranky will greet them, usually with some wise-crack about how slow they are or how easy the game is. Cranky then proceeds to do some small talk, but there are various levels tips found in between his rambling. The level tips are random, and usually about earlier levels. On occasional, rare times, Cranky will suddenly break into an all-out rant about how "easy" the Kongs have it, how much he had struggled "back in the day", with "three shades of gray" and how his beard flows when he swings, calling it a "waste of frames".

There is a Cranky's Cabin in every area of Donkey Kong Country (excluding, of course, the Gangplank Galleon), though the tips shown usually do not change. However, hacking has shown that Cranky actually had a very wide selection of phrases programmed in the game, though a majority were not in the final version.[1]

He also sometimes comments how he would invite them in, but the game didn't have enough memory space.

In the Game Boy Advance version, the area took place inside instead of outside.

While no making a seen appearance, Donkey and Diddy make a bet with Cranky in this location that they are not able to defeat the Kremling Krew on a handheld system.

While it doesn't do anything in the gameplay of Diddy Kong Pilot, Cranky can be seen sitting next to his cabin when speaking to the player after defeating a Kremling, completing a track, etc. His location is also made out of a barrel. 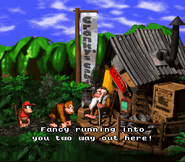 Cranky's Cabin in the SNES version of Donkey Kong Country.

Diddy Kong Pilot
Add a photo to this gallery

Cranky's Cabin in the 2003 build of Diddy Kong Pilot.
Add a photo to this gallery

Retrieved from "https://donkeykong.fandom.com/wiki/Cranky%27s_Cabin?oldid=58523"
Community content is available under CC-BY-SA unless otherwise noted.