Cordian is a leading member of the Tiki Tak Tribe who appears in the boss level of the Factory, Feather Fiend.

It hypnotizes Colonel Pluck into making the Stompybot 3000 to squash Bananas, which power up the Tiki minions. When Donkey Kong and/or Diddy Kong appear, they are forced to battle Pluck. When he is defeated, Cordian rises up and Donkey Kong sends the tiki flying away. Later, it is seen with the rest of the hypnotic tikis by becoming part of one of Tiki Tong's hands.

Cordian's tune is Kalimba's base tune with an accordion playing in the background in the same fashion of Kalimba's tune.

Cordian is an accordion-like being that has a malicious, yet angry smile. it also has a skirt-like structure on under its face. It has long limbs, ending with 3 fingers, like Krazy Kalimba, Banjo Bottom, and Wacky Pipes. It also has a headdres-like structure that is apart of its accordion-like stature. It has 4 rhombuses on its bellows. It has peach and purple stripes protruding from top to bottom on its bellows as well. Cordian also has purple and red eyelashes, along with 3 dialect stripes for its eyes. It’s mouth is sharp and has an actual jaw. At the top of its head, the tiki has a multiple colored leaf, starting with red to yellow. It also has multiple marks on its face, a few are yellow, and some are a light red. 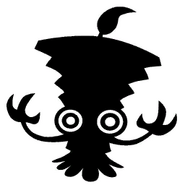 Cordian's silhouette when a Kong loses a life.