Coral Capers is the fourth stage found in Kongo Jungle and Donkey Kong Country. It comes after Reptile Rumble and before Barrel Cannon Canyon.

This stage is the first underwater stage. It also features Enguarde, who helps out Donkey and Diddy throughout the stage. All of the aquatic enemies aside from Squidges are featured in this stage as well. Throughout the stage, hidden areas are plenty, often housing a large amount of bananas or Animal Tokens. These hidden areas are found by swimming through fake parts of the coral walls. There are twelve Bitesizes, four Croctopi, two Chomps, two Chomps Jr. and a lone Clambo, all of whom are introduced in this stage.

Coral Capers begins with a couple Bitsizes swimming toward the Kongs. Simply swim around them to avoid them. Keep swimming up in the long, vertical section after the Bitsizes to find the Letter "K." After collecting it, continue to find the first Croctopus. As it begins to spin and swim, swim behind it until a single banana can be seen at the bottom of its path. This is the first secret area. Collect the banana and swim downwards to find many, many bananas and a single banana bunch. Once they are collected, swim back up and continue forward, being careful to avoid the Croctopus, which is constantly probing the area. Next, swim down under the arrow of bananas to find Enguarde. Swim up with him to reach the second Croctopus. As soon as the Croctopus spins up and swims, go right and up to find a red Extra Life Balloon. Quickly collect it, then swim down, avoiding the approaching Croctopus. Swim to the left-hand corner to escape the incoming Croctopus and find another DK Barrel. Continue forward, using Enguarde to bash the Bitsizes away. The Star Barrel can be seen now.

Above the Star Barrel are a couple collectibles, including the Letter "O"; be careful of the Chomps Jr., however. If Enguarde gets hit, he will quickly swim away, and the Kongs will have to chase him to ride him again. Follow the arrow of bananas downwards to find another Croctopus. If the Kongs lost Enguarde, they can find him again at the bottom right-hand corner of the Croctopus's path. Continue left to escape the Croctopus. After another Chomps Jr., swim up to find two Chomps. As they swim back and forth, swim to their right to find another secret area containing some bananas and an Expresso token. Swim left to exit the secret area, but be weary of one of the Chomps stil swimming back and forth. Next, swim up, similar to the Letter "K," to find the Letter "N." Swim back down and right once it is collected. The next area contains many Bitsizes swimming toward the Kongs. With Enguarde, it is easy to bash them away with his sword-like bill. After the Bitsizes, there is a Clambo releasing pearls to the northwest and northeast directions. Dodge them to continue. As the stage nears its end, one final Croctopus swims in a "figure-8" pattern around the Letter "G." Snag the "G," being watchful of the Croctopus's swim pattern. 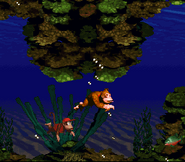 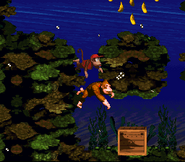 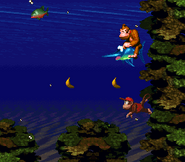 Donkey and Diddy on Enguarde. 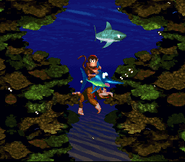 Donkey, Diddy and Enguarde beneath a Chomps. 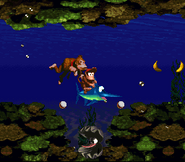 Donkey, Diddy and Enguarde swimming towards the letter G. 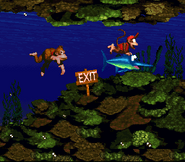 Donkey, Diddy and Enguarde at the end of Coral Capers.

Donkey and Diddy swimming past a Croctopus and Chomps in the artwork.

Coral Capers in the overworld.

The start of the level.

Donkey and Diddy beneath the letter G.