Colonel Pluck was hypnotized into stomping on a bunch of bananas into mush and using them to animate various Tiki minions (Tiki Goons, Tiki Tanks and Tiki Torches). He was then forced into battle against Donkey Kong and Diddy Kong. When defeated by them, he is knocked out cold and lies unconscious under the remains of his robot, while Cordian gets a beating and is sent flying by Donkey Kong.

Colonel Pluck is a white chicken that wears goggles with a black frame. He has a limp, red comb on his head and fairly long arms and neck for a chicken. He also has four tips at the end of each arm, which function similar to hands, helping him control the Stompybot 3000.

Colonel Pluck appears as a trophy.

NA: Stomp all night, stomp all day. Colonel Pluck has been hypnotized by the Tiki Tak Tribe to mash bananas with his Stompybot 3000. Looks like they're creating new tribe members with the resulting juice. Hopefully they're peeling those bananas... Nothing worse than leftover peel in a banana smoothie.

PAL: He stomps stolen bananas into mush with his giant stomping machine. Why does he do it? Because the Tiki Tak Tribe are controlling him - that's why! They're using the banana mush to create new tribe members. Who knew bananas were so magical? 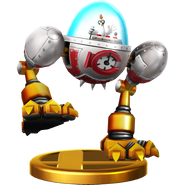