Many platforms in this level are suspended from the snow that pours down the slope. The Kongs also must be wary of platforms, particularly bones, that break from their weight. In the second half of the level, they must progress up the mountain through the use of platforms that rise and sink from the snow, as well as flower trampolines, vines, and a few Barrel Cannons. Toward the end of the level, the slope becomes much steeper, and the Kongs must climb through use of crumbling wooden platforms. Common enemies along the way include Tucks, Archies, Big Sphens, Walnuts, and Hootz.

The beginning of the level leads past a few enemies, such as a Waldough and a Pointy Tuck, and then to a Barrel Cannon suspended over a pit. A Puzzle Piece is located in an alcove, hidden behind wooden planks. The Barrel Cannon shoots the Kongs into an area where they must climb up the mountain by use of tilting platforms, which are shaken by the avalanche. The letter K is found in this section above two Pointy Tucks. After the Kongs pass a fire-shooting Archy, another Barrel Cannon is placed to launch them ahead into another Barrel. Two Blue Hootz circle through the area that the Kongs must shoot through, so they must watch their timing. Afterwards, they land in an area consisting of two trampoline flowers that are followed by a large structure made from wood and bones. Donkey Kong and the gang must travel quickly to the nearby Barrel Cannon, or else the structure will sink into the snow. On the way to the barrel, a few Tuck enemies stand in the way. The Barrel Cannon, and the one following it, shoot the Kongs to the first checkpoint, located on solid ground.

Ahead, the first DK Barrel in the level lies after a small gap of spikes, and the barrel can free one of the three other Kong characters: Diddy Kong, Dixie Kong, or Cranky Kong. The path ahead lies on a long and solid wooden structure. Here, a Big Sphen can be found guarding an alcove with a Puzzle Piece. Another Big Sphen is placed ahead of the letter O, which is surrounded by two spiked ceilings. This means that the Kongs cannot jump over the Big Sphen's ammunition while under the spiked ceilings, as doing so will send them into the spikes. A Barrel Cannon ahead shoots to an area of more small platforms and flower trampolines suspended over the avalanche. Some of these platforms crumble or sink moments after the Kongs stand on them. Enemies in this section include Tucks and a fire-shooting Archy. Eventually, the Kongs must climb a vine ceiling to advance to addition platforms. The structure with these vines holds a plant with a Puzzle Piece in it. A dinosaur skull also lies ahead of here, and if stood on for too long, the upper jaw crumbles and can damage the Kongs. The skull is followed by a series of swinging vines, which lead to a Barrel Cannon. The letter N is also in this area, suspended above a Hootz. The two Barrel Cannons ahead of here shoot to the second checkpoint.

A second DK Barrel, which includes all three Kong characters, is located ahead of here, where the Kongs travel along a solid, wooden structure with many spikes along it. The Kongs are able to find a Puzzle Piece enclosed in a plant by climbing to a ledge, which can be reached by jumping on a fiery Hootz. After passing a Chum Chucker Charlie, the Kongs can find a Barrel Cannon, which shoots them to a steeper section of the mountain. As they are launched over the abyss, a massive stone fortress crumbles in the background. In this steep section of the mountain, Donkey Kong and the gang must utilize the wooden planks suspended over the avalanche to climb upwards. Additional planks fall toward them as they continue up the slope, and some of the planks break when stood on. A Puzzle Piece is located in a plant towards the top of the area, where the letter G is suspended over a fire-shooting Archy. A Barrel Cannon nearby also shoots the Kongs to a higher section, where they must again use wooden planks and flower trampolines to progress upwards. Two Hootz must be used here to bounce to the next Barrel Cannon. This cannon shoots to a section where the platforms are also occupied by Archies. After passing these enemies and moving ahead, the Kongs enter a series of Barrel Cannons that lead them to a huge, curved wall of vines. The vine structure sinks and crumbles as they climb, so they must quickly advance to the nearby Barrel Cannon. A spiked wheel travels along the vines, but they can knock it off by pounding on the vines. The Barrel Cannon shoots them the remaining distance up the mountain and through a large cloud. Once they exit the cloud, another cannon shoots them to a platform with a small handle on it. The Slot Machine Barrel appears when the handle is pulled. 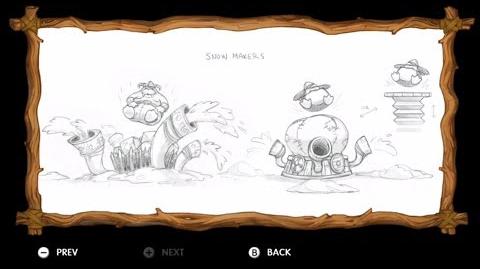