Click-Clacks (ビートル Bītoru in Japan) are a species of generic beetle enemies first encountered in the game Donkey Kong Country 2: Diddy's Kong Quest. They are one of the few DKC2 enemies to make appearances in later games.

Click Clacks are common enemies usually found patrolling the areas of Gangplank Galleon and Krem Quay. Click-Clacks are actually more durable than a lot of enemies in the game; they can be jumped on once and not be defeated immediately. However, when they are jumped on, they will be flipped helplessly on their back, unable to move for a short time. While on their backside, they can be jumped on again to be defeated or picked up and used like a regular barrel projectile. Besides that, Click-Clacks can be defeated instantly with a cartwheel.

Click-Clacks appeared again in DK Jungle Climber. In these games, they climb around on pegs and they can't be attacked from the front as they will hurt Donkey Kong. 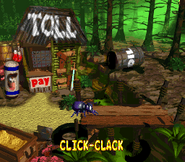 Click-Clack in the credits screen. 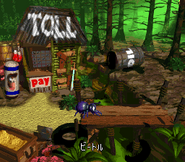 Click-Clack in the credits screen in the Japanese version. 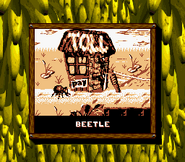 Click-Clack in the credits screen in the Japanese version of Donkey Kong Land 2.