Not to be confused with Chomps, carnivorous plants or Snaggles, shark enemies from Donkey Kong Country Returns.

"Don't worry, people, the Chomps police is already here. Where are the appetizers ...er, I mean, suspects?"
—Chomps, DKC comic[1]

Chomps are a species of generic shark-like fish, found in the underwater levels of Donkey Kong Country. They live in the waters surrounding Donkey Kong Island. Chomps are big and quite fearsome, though slow and are not common. They also have a small, nimble variant called Chomps Jr.s.

Chomps debut in the original Donkey Kong Country. Since there are not many water levels in DKC, there are not many Chomps to be found. Chomps are about as strong as any other aquatic foe, simply touching one will injure a Kong or Enguarde. Their sub-species, Chomps Jr., are more common in the water levels. Both can be defeated with a bill-stab from Enguarde.

In the comic "Donkey Kong Country", two Chomps try to attack Donkey and Diddy Kong. They are supposedly a part of the "Chomp Police". This seems to be a self-promoted position, seeing the other underwater creature's opposition to them.

Chomps have not made other appearances aside from several of them seen swimming around in the background of a trailer for the canceled game, Donkey Kong Racing. In Donkey Kong Barrel Blast, a more threatening looking shark resembling Chomps appears in an underwater race course as an obstacle. Similar, but much more cartoon-like sharks appeared in water levels of the games Donkey Kong Country Returns and Donkey Kong Country: Tropical Freeze, called Snaggles and Golden Snaggles. 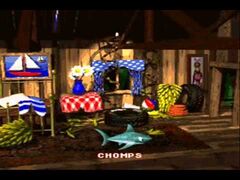 Chomps appearing in the credits for Donkey Kong Country.