Not to be confused with Chomps, shark enemies from the game Donkey Kong Country.

In Donkey Kong Country Returns and Donkey Kong Country Returns 3D, regular Chomps are most present in the Forest world levels of the Donkey Kong Island. They debut in the Jungle level King of Cling, and later also appear in the Cloud level Crushin' Columns of the Nintendo 3DS game version. The red variant, displaying two different sizes, reachs out and gives a big bite at regular intervals. They are usually found above pits, but regular-sized red Chomps are also located inside holes on walls and ceilings. Considering how direct contact with these enemies can harm the primates, and they can be defeated only by the heroes throwing single barrels at them, regular Chomps usually must be avoided by the player. They also possess a yellow variant appearing only above pits in the Forest world, which takes longer intervals when reaching out and biting. The giant version of the red Chomps, always present above pits, is much slower and louder than their smaller counterparts, but the large bodies can harm the Kongs upon contact easily. It is unknown how they got so large. It is advisable to also avoid both large red and yellow variants because both types are also defeated only by single barrels thrown at them. Red and yellow Chomps are immune against peanuts shot by Diddy Kong's Peanut Popguns and the ground-pound move.

All of these variants of Chomps appear first in the Forest world.

The blue variant, Vine Chomp, has the main body at the top of the screen, leaving an unsuspected long vine for its prey to grab. If the primates hold the vine, the Vine Chomp will pull in the heroes slowly, trying to eat them. In case of being eaten by them, the Kongs can quicky pound and free themselves (done by shaking the Wii Remote[1] (and Nunchuk) in the Nintendo Wii version of the game or tapping the "X" and "Y" buttons in the Nintendo 3DS version). Vine Chomps are invincible against any attacks.

The Shooting Chomp variant stays on floors or ceilings, and spews spores at five different directions at regular intervals, trying to hit the primates. The ones present on the floor can be defeated by single roll or jump attacks. And both types can be taken down by barrel throws.

The Green Chomp variant keeps its mouth open and displays a red protuberance of a tongue, trying to disguise it as a small mushroom. Usually, the Kongs must use them as bouncy platforms, but if the heroes end up swallowed by one, they can still get away by quickly pounding the plant (in similar way to Vine Chomps). This variant cannot be harmed by any attack.

In Donkey Kong Country: Tropical Freeze, there are three variants of Chomps.

Venus Trap Platforms appear in the world Lost Mangroves and are green in color. They (namely) have shrubs above their mouths which can be used as platforms. Their way of attacking Kongs and animals is by lowering themselves down from their position and biting. They cannot be damaged by any means.Venus Trap Platforms are also capaple of devouring Tucks in the level Mangrove Cove.

Chompettes appear in the world Bright Savannah and are yellow in color with purple spots. These vertically-positioned Chomps can be jumped on until they open their mouths to take a bite. They cannot be defeated by any means.

Chompasauri appear in the world Juicy Jungle. They are purple in color and have vines acting as legs. They can move and will bite Kongs. They also have long tongues they will use to damage or ensnare them. They can be jumped on, ground-pounded in front of to stun or have a barrel thrown at them. Chompasauri can also attack other enemies, as seen at the end of the level Reckless Ride when it is seen devouring the Tuck that was piloting a mech throughout the level when it was ejected.

Donkey Kong nearby a red Chomp, as seen in the game Donkey Kong Country Returns for Wii. 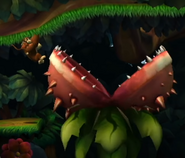 Donkey and Diddy Kong moving next to a large-sized red Chomp, as seen in the game Donkey Kong Country Returns for Wii.

Donkey and Diddy Kong swinging on a vine above two yellow Chomps as seen in the game Donkey Kong Country Returns for Wii.

The Chomp Family artwork from the game Donkey Kong Country Returns for Wii.