Buzzes are robotic replacements of Zingers debuting in Donkey Kong Country 3: Dixie Kong's Double Trouble!. They come in a variety of colors and sizes.

In these two games, Buzzes are often used as stationary obstacles to Dixie and Kiddy. The Green Buzzes can be defeated by Barrels or a certain type of Animal Buddy. There are also red Buzzes, which are tougher and can only be defeated by TNT Barrels or a Kong under the effect of an Invincibility Barrel.

There is also a small swarm of Buzzes in the level Riverside Race, chasing the Kongs. This swarm cannot be defeated.

Buzzes appear in Diddy Kong Pilot as usable items. This can be seen in a gameplay video on YouTube posted by a Rare member. Buzzes apparently act as missiles in this game, much like the rockets from Diddy Kong Racing; there is also a new blue version that acts as a homing missile.

Their name is a play on words of the onomatopoeia 'buzz', the sound that bees make when they fly, and the buzz-saw in their abdomens. KAOS was probably running out of Zingers to the commonness of them in previous games and how many are usually defeated in one game. They might have had Buzzes instead because the final boss is a machine builder and the creators probably wanted the game to look that way. Despite this, their wings and bodies seem organic. Buzzes are usually more expendable and troublesome. 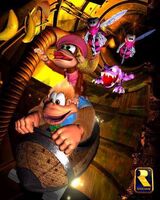