Button Barrels are Barrel Cannons which the shooting or trajectory is controlled by the Kongs stepping on a button nearby. They appear only in the game Donkey Kong Land.

The first type of Button Barrel is found in some Bonus Rooms of the game. Inside these rooms, the primates must expend Kong Tokens by stepping on the button below the barrel in order to it shoot the same tokens. By collecting these items, the player receives extra lives. However, the player must use good timing for activating the button when the Barrel Cannon is pointing downwards. The barrel is constantly moving left and right, and rotating 180 degrees at the top of the screen, making easy to miss the Kong Tokens shoot by it.

During the stage Button Barrel Blast of the world Big Ape City, the main feature is the second type of Button Barrel. Here, the heroes stepping on a button once just changes the trajectory of a Barrel Cannon next to it. The player can adjust these barrels to shoot at one of the eight directions. After the trajectory is chosen, the Kongs can jump inside of it, and the Barrel Cannon will blast the primates away automatically. 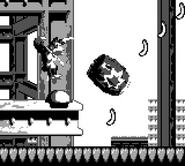 Donkey Kong about to step on a button in order to change the shooting trajectory of a Button Barrel nearby, as seen in the game Donkey Kong Land for Game Boy.
Community content is available under CC-BY-SA unless otherwise noted.
Advertisement