Busted Bayou is the second secret stage in Lost Mangroves from Donkey Kong Country: Tropical Freeze. It is preceded by Zip-Line Shrine and followed by Swinger Flinger. It is unlocked after finding the secret exit in Canopy Chaos.

This level uses the same silhouetted visuals seen in levels such as Sunset Shore from Donkey Kong Country Returns, this time with a green hue.

The first part of the level is mostly flat, and a DK Barrel can be found at the start. There is also a short vine which, when pulled, will create two platforms with Bananas appearing on them, and part of a plane frame structure. Several other crashed airplanes can be seen in the background; among them, Samus's Gunship from the Metroid series can be spotted. At the first pit just after that, there is a pair of platforms suspended via a pulley system that the Kongs can use to get across and reach the first checkpoint.

Just after the checkpoint, there is a frame structure of an even larger plane slowly tilting to and fro. Beds of spikes and enemies can be found on the structure, which can be avoided using the swinging vines. Eventually after that, the Kongs will reach the end of the path. Here, the Kongs should pound the ground to reveal a plug connected to another small structure. Pulling on this plug will cause the structure to drop and reveal a vine leading down.

Now in the second half of the level, the Kongs will find several Mimics and Large Mimics. Just past them is a plug that reveals a giant vine, creating a path for the Kongs. The vine leads to another DK Barrel and a series of platforms, one of which is powered by a propeller. If Donkey Kong pulls onto this one, the smaller platforms after it will align diagonally, allowing him to roll across them easily. After that, the Kongs will end up on a flat platform with a single plug; pulling it out will create a large vine structure with platforms. The Kongs must use it to reach the Barrel Cannon.

After being launched from the Barrel Cannon, the Kongs will land on another balancing plane structure in the background with the Slot Machine Barrel in sight. This structure tilts more intensely than the one before, and has a platform that moves in the same direction as the plane, as well as a vine that triggers a pair of platforms, but also reveals two Large Mimics. Using these platforms, the Kongs can reach the goal. 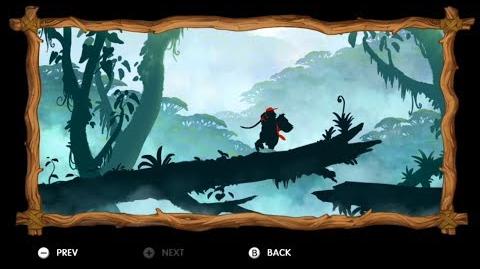