Not to be confused with Buckies, caterpillar enemies from the game Donkey Kong Country: Tropical Freeze.

They are robotic windup chickens that are colored white and red.

They can be defeated with a jump on the head or with a roll. They will hurt the player if a Kong touches them. Their windup key is bronze in color.

There are variants called Buckbombs, which act the same as Buckbots, except they become immobile when jumped on, and will explode after time. They can also be thrown and will explode when collided with an enemy. They are brown in color and have blue eyes instead of red, and has a fuse instead of a windup key. 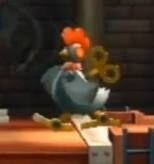 A closeup of the Buckbot.

A closeup of the Buckbomb.

A higher resolution of the Buckbomb.
Deutsch Español
Community content is available under CC-BY-SA unless otherwise noted.
Advertisement