"I'll get my title from you, Dixie, just you wait!"
—Brash

Brash (ブラッシュ, Burasshu in Japan) is a member of the Brothers Bear residing in Kremwood Forest. Brash, as his name implies, is a very cocky, arrogant, and stereotypical athlete who thinks of himself of the "the best there is and ever will be". He lives in a cabin in the Super Nintendo version of Donkey Kong Country 3 and a sports stadium in the Game Boy Advance version.

Brash lives in the northwestern area of Kremwood Forest, more than halfway through the world. In a previous level, Riverside Race, Brash holds a record for completing the level in one minute, fifteen seconds. If Dixie and Kiddy Kong manage to beat his record and pay Brash a visit, he will throw a tantrum, causing a loose log to fall off a tree and land in the river, leading to a secret Banana Bird Cave, Arich's Hoard. Other than reaching the Cave, Brash has no other significance in the game. If the Kongs revisit him any time after beating him, he will get angry and kick them out. 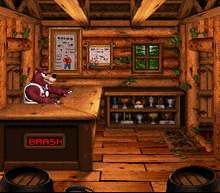