It features many brambles, a nod to the bramble levels in Donkey Kong Country 2, as well as platforms and obstacles that gradually appear as the Kongs proceed through the level.

As the Kongs start to move forward in the level, solid platforms, semi-solid platforms made of dandelions, cacti, and enemies including Swooper Doopers will begin to appear. The cacti act similar to the beds of spikes found in previous levels, and will hurt the Kongs if they land on them. The Kongs will also find a Kong Barrel, and a vine which, when pulled on, will produce an even bigger vine from below, whose leaves can be used as platforms to cross the bed of cacti. Later, the Kongs will encounter a wide bottomless pit, from which a large vine with platforms will extend. Using the platforms, the Kongs will then reach and jump along several spring mushrooms, avoiding enemies along the way. Shortly after that, there will be a Barrel Cannon that launches the Kongs to the next area.

Past the first checkpoint, the Kongs will run into more of the same obstacles. After crossing another bed of cacti and a small pit, there is a vine the Kongs will need to pull onto to reveal more platforms. The platforms also reveal a Buffaloafer, but lead the way to the next Barrel Cannon. After launching through a forest of brambles, the Kongs will end up in the third area and be attacked by two Porcupals upon arrival.

After passing the next checkpoint, more solid and dandelion platforms will appear, except this time they are moving. The enemies are also more abundant. Eventually, just past two spring mushrooms, the Kongs will enter a short series of Barrel Cannons. Here, they must time their launch to avoid colliding into the moving brambles and Blue Hootz. After overcoming them, the Kongs will reach the Slot Machine Barrel. 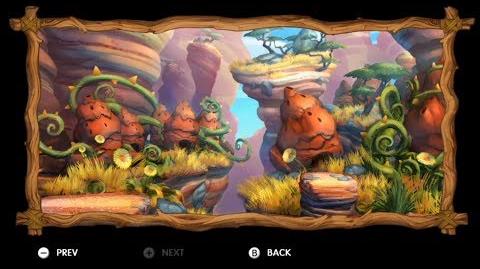