Boomer (ブーマー, Būmā) is one of the Brothers Bear in Donkey Kong Country 3: Dixie Kong's Double Trouble!. Unlike his other bear siblings, Boomer wears a construction hat and is a demolition expert.

Boomer resides in the secret world Krematoa during the events of Donkey Kong Country 3, because the other bears thought of him as too dangerous to have around. During his time in Krematoa, he made explosives and found a bomb shelter for him. If the Kongs venture to Krematoa to meet him, they have to pay a toll of 15 Bonus Coins in order for him to set off an explosive to clear the way into the next level in the area. As such, he was key to finishing all the levels of the game. In order to get him to clear the way to the last level, the Kongs have to pay him 25 Bonus Coins.

When Boomer first entered the empty Boom Shelter, he stumbled upon an odd machine that runs on Cogs found by clearing each level in the world. When it is assembled, the device enhances the volcanic activity of Krematoa and causes Baron K. Roolenstein's Knautilus to rise as well. Once this happens, the Kongs can face K. Roolenstein for the final time and get the secret ending. 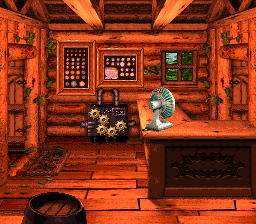 Boomer's sprite in the SNES version

Boomer's sprite in the GBA version