Bonehead Jeds are mostly found in the Cliff world of the Donkey Kong Island, and later in the Cloud level Tar Ball Fall. They extend their spines and use the arms to move their carts around. Bonehead Jeds will constantly move back and forward between platform edges. If the primates jump nearby to a Bonehead Jed, it will extend its spines to try block the heroes' path. After receiving a jump attack, Bonehead Jeds will just get stunned for a few seconds, requiring a second attack to be defeated for good. If the player takes too long for attacking again, the enemy will just resume its patrol, restoring its full health. Bonehead Jeds can be defeated once by the Kongs throwing barrels at them. Bonehead Jeds cannot be stunned by the ground-pound move or Diddy Kong using his Peanut Popguns to shoot peanuts at them. And they are imune against roll attacks, except when they stunned.

The appearance of this foe is that it has a cart full of tar. The cart has old, damaged wooden wheels which it uses to go around. It appears to have screws in the middle, making it a wheel. The cart's body appears to be half of a barrel, full of tar, which is seen all over the Cliff world. The dinosaur itself has ten rows of teeth on both its upper and lower jaw. It has eyes that are partially blocked off by the bone connecting to its mouth. It has many spine layers, and when fully extended, can reach up around three times taller than Donkey Kong. 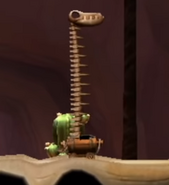 Bonehead Jed with its long spine up, as seen in the game Donkey Kong Country Returns for Wii. 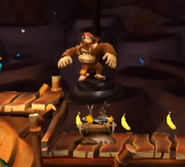 Bonehead Jed stunned after being hit once by a jump attack, as seen in the game Donkey Kong Country Returns for Wii.