Blue is one of the Brothers Bear in Donkey Kong Country 3: Dixie Kong's Double Trouble!. Blue is, oddly, a blue colored bear who is lonely and upset. His name is a take on his color and how he feels "blue".

Blue lives in a beach house in Cotton-Top Cove. When Dixie and Kiddy Kong get to him, he states that he is upset that everyone forgot about his birthday and no one came. However, this is untrue as Blizzard actually remembered and got him a present, though could not make it due to how far away he lived. The Kongs can deliver Blizzard's present once they speak with him to Blue.

The present is revealed to be, oddly, a Bowling Ball. After this, his theme will change from a 'sad' version of the Bros. Bear theme to the normal version from than on, meaning he's now happy. Blue finds no need for the gift so he lends it to Dixie and Kiddy. The bowling ball is later used to power up Bazooka's cannon. 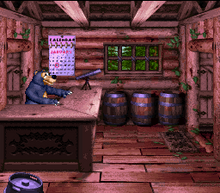 Blue in Blue's Beach Hut
Add a photo to this gallery

Retrieved from "https://donkeykong.fandom.com/wiki/Blue?oldid=59277"
Community content is available under CC-BY-SA unless otherwise noted.