Big Top Bop is the boss stage in Lost Mangroves from Donkey Kong Country: Tropical Freeze. It is preceded by Swinger Flinger and followed by Windmill Hills.

The stage begins in a small hallway with a DK Barrel. After releasing Diddy Kong, Dixie Kong, or Cranky Kong (if the player doesn't have one of them already), Donkey Kong continues on until a cutscene begins:

The Kongs head to the edge of an arena shaped like a half-pipe. Without warning, the lights come on. Shielding their eyes, the simian heroes see a giant seal dressed in Viking gear suddenly jump through a circus-hoop covered in cloth. The seal slides up and down the half-pipe for a little bit, and stops on the other side of the arena. The monkeys quickly realize that the seal works for the Vikings who took over their home, and get into a fighting stance. The seal begins to threateningly clap its flippers. Without warning, Donkey and either Diddy, Dixie, or Cranky are pushed into the arena by a group of penguin enemies, and begin to challenge the giant seal.

The fight begins with the massive seal sliding back and forth across the arena on its belly. When it gets close, the player gets a chance to jump on his back, knocking him off the arena. If he gets knocked off, the seal will begin bouncing fish enemies off his nose, (with an occasional larger fish, or sea urchin), and into the arena, which the Kongs will have to defeat. The cycle repeats multiple times, until he takes enough hits. Then, the seal will slide down the half-pipe, though this time he is rolled up on his side, and cannot be jumped on. However, after rolling through the arena, he will slide normally the next time. After a few more hits, he will begin sending up to three ninja-like penguins into the arena. He will either make them jump into the arena while he's in the water, or send them sliding loops around the stage, along with him. After that, he will try to jump on the player to crush him. After receiving enough of a beating, the seal will be defeated, and Donkey Kong can deal multiple rapid punches to him to end the fight. 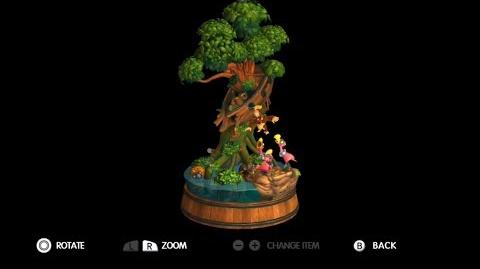