Belcha is the barrel boss of the Lake Orangatanga world of the Northern Kremisphere, as well as the first boss in the game Donkey Kong Country 3. Belcha is a odd boss, as it is a giant, apparently living wooden barrel, with eyes, a mouth and large teeth. It resides in the stage Belcha's Barn at the end of Lake Orangatanga, following the stage Murky Mill.

The stage takes place inside a mill/barn. The Kongs will enter the location, but the boss battle will only start after they falling through the trapdoor on the ground in front of them. Right below the trapdoor, there is also a hidden DK Barrel. At the floor below, the primates will be greeted by Belcha spitting out a wooden barrel at them and jumping forward. The boss' large mouth plays a role in its attack patterns. Direct contact with the boss does not harm the heroes.

The barrel thrown by the boss cannot harm the Kongs either. By the primates jumping on the barrel, a yellow Knik-Knak will come out of it. The heroes have to jump on the insect once to get it on its back temporarily. It can then be picked up and used as a projectile to be thrown into Belcha's mouth. Considering how the mouth is above the ground height, the Kongs usually must jump and throw the Knik-Knak at it while they are still in the air. Good timing is required by the player in order to jump and successfully launching the insect into Belcha's mouth. Kiddy Kong may be best suited for this job. However, in the Game Boy Advance version of the game, if Dixie Kong is close enough, she is capable of throwing Knik-Knaks into the boss' mouth while standing on the ground. And only in the same version, it is possible to hit the closing teeth, missing the target. By hitting any other part of Belcha's body in both game versions, the Knik-Knak will bounce off and be defeated. Each time the player fails on this, Belcha will immediately spit out another barrel and jump forward, pushing the primates towards the left direction in the process. The same also happens if the heroes take too long to bounce on a barrel thrown by the boss or they defeat a Knik-Knak. At the left edge of the stage, there is a pit in the Super Nintendo Entertainment System version of the game or a large grinder in the Game Boy Advance version. The respective hazard is meant to defeat both Kongs by the boss pushing them towards it eventually.

If a Knik-Knak is successfully launched into the boss' mouth, Belcha will munch it and release a strong belch, pushing itself back. Soon after that, the boss will repeat the pattern of spitting a barrel and jumping forward, also forcing the player to repeat the same strategy mentioned previously. The right edge of the stage possesses a pit and a floating, wooden platform over it. By the player eventually pushing the boss all the way back, Belcha will fall into the pit and be defeated.

After Belcha is defeated, the Kongs can collect a Bonus Coin. In the GBA version, Cranky Kong also appears, congratulating the heroes on the victory against the boss. Next, the primates will be blasted away by a cannon towards the exit of the world map of Lake Orangatanga. In the overworld map of the Northern Kremisphere, the player can now access the world Kremwood Forest. 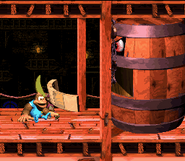 Kiddy and Dixie Kong throwing a Knik-Knak into Belcha's mouth as seen in the game Donkey Kong Country 3 for GBA. Notice the grinder added to the pit at the left edge of the stage in this game version.